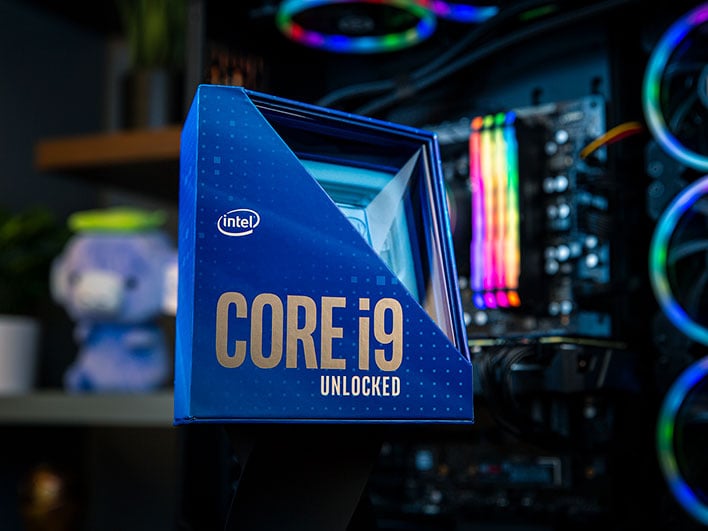 Intel officially announced its upcoming Rocket Lake-S family in its keynote during virtual CES 2021 last month, but those processors have been leaking onto the internet for the last several months. The leaks all seem to indicate that Intel is about to snatch the single-threaded performance crown back from AMD's potent Zen 3 processors in the Ryzen 5000 lineup. Sky-high clock speeds and XL-sized IPC combine for some pretty intense Geekbench scores hidden away in the benchmark's online database.

According to a pair of back-to-back runs, the top-end Core i9-11900K with its eight cores and maximum boost clock speed of 5.3 GHz broke 1,900 on the single-threaded benchmark in Geekbench 5. Back when we were trying to wring the most performance out of our Ryzen 7 5800X in the Power Curve Optimizer Guide last month, we were pleased to see that processor reach 1,720 in the same test. That means Intel is taking the single-threaded performance crown back for itself, at least in that test. The pair of tests shared the same Gigabyte Z490 AORUS Master motherboard with 32 GB of DDR4-3600 memory — the same as our Ryzen test platform — which more or less puts the CPUs on the same level. 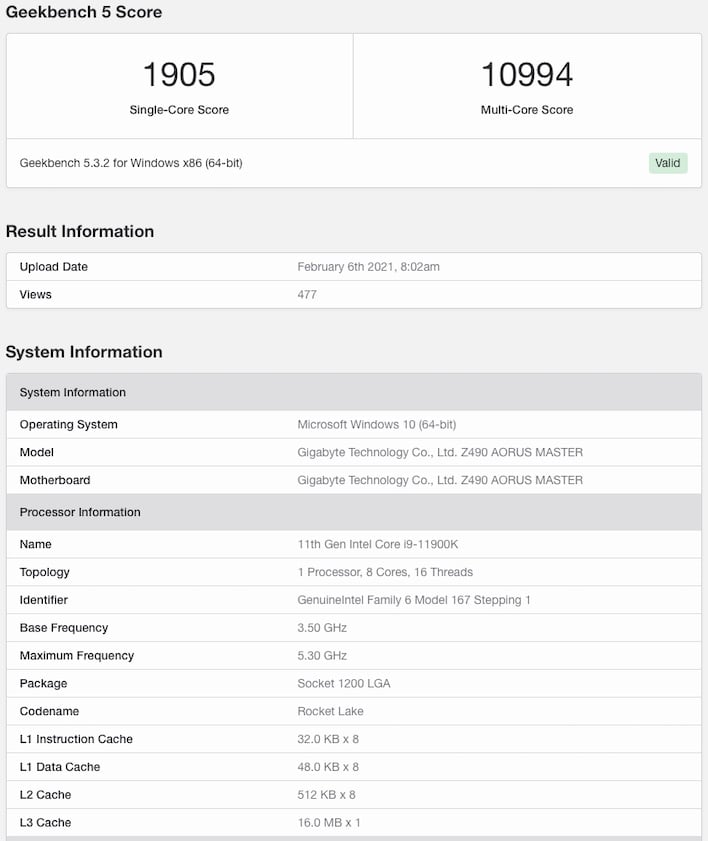 Impressive as that is, Intel's processor also just about hit a multi-threaded score of 11,000. The Core i9-11900K test machine apparently reached 10,994 in one of those two runs, good for a 5.77x speed-up over the single-threaded score. That pales in comparison to the eight cores the processor packs, but it's very common for modern processors to run their cores in multi-threaded loads at a lower speed out of necessity to stay within its thermal and power budgets. For reference, our overclocked Ryzen hit 10,087 on that test. That means Intel has around a 10% advantage in single-threaded Geekbench but a slightly smaller 8.99% lead on AMD in the multi-threaded test.

Everything in the Geekbench tests confirms what we've seen in other leaks with the Core i9-11900K. Last weekend, we spotted some sky-high numbers in CPU Mark and PassMark where Intel's unreleased CPUs rocketed to the front of the pack. Of course, we've been looking at leaked Rocket Lake-S benchmarks for what seems like forever, but their release is just around the corner. We'll find out in March if Intel's promised 19% IPC boost extends past synthetic benchmarks and into the real world. Stay tuned for the latest.