Another day, another leak related to Intel's upcoming Comet Lake-S series. This latest one pertains to the Core i9-10900K, the top dog in the Comet Lake-S stack (based on past rumors), which apparently got benchmarked while nestled inside an ASRock Z490M Pro4 motherboard based on Intel's also-unreleased Z490 chipset.
The Core i9-10900K is equipped with 10 cores and 20 threads of computing muscle. It has a 3.7GHz clock and 5.1GHz single-core boost clock, or 5.3GHz via Thermal Velocity Boost (TVB), which is an extra nudge for setups with burlier cooling solutions to handle the higher clockspeed (and subsequent rise in thermals). It also has 20MB of total cache and a 125W TDP.

Twitter user and prominent leaker @_rogame spotted the chip and motherboard combo in a 3DMark Fire Strike database entry. Have a look... 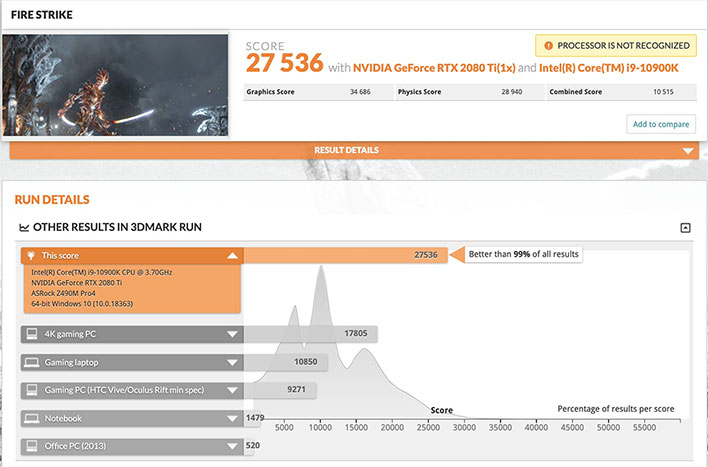 The testbed is also equipped with an NVIDIA GeForce RTX 2080 Ti graphics card, so it's a burly setup. To narrow down performance to the CPU, we need to look at the Physics score, not the overall score. In this leaked benchmark run, the Core i9-10900K posted a Physics score of 28,940. That's right on par with a previous leak, in which the Core i9-10900K (paired with 64GB of DDR4-2666) scored just a hair higher at 28,988.
Unfortunately, we don't have our own collection of 3DMark Fire Strike Physics scores to compare against. However, it's easy enough to search through 3DMark's database. In his Twitter post, _rogame posted a few Ryzen 9 3900X scores in the same test. Have a look...
Intel is dealing with a clockspeed advantage, but is disadvantage by the number of cores and threads in this comparison. The Ryzen 9 3900X wields 12 cores and 24 threads with a 3.8GHz base clock and 4.6GHz max boost clock, 64MB of L3 cache, and a 105W TDP.
In this particular benchmark, the Core i9-10900K is about on par with the Ryzen 9 3900X, coming in just slightly below. Bear in mind that the Z490 has not been officially released yet, so driver updates could close the small gap that exists in performance.
Of course, this is just one benchmark (and a leaked on at that). While the Core i9-10900K has a decent showing here, we suspect the Ryzen 9 3900X will best the Core i9-10900K in workloads that are properly optimized to hammer all available cores and threads. We'll know soon enough, as Comet Lake-S will undoubtedly be launching soon.