It's been almost a week since Intel formally introduced its 10th generation Core processors for the desktop (Comet Lake-S), and later this month, the launch will be accompanied by reviews and actual retail availability. In the meantime, we still have to rely on leaks to catches glimpses of what Comet Lake-S will be capable of when it lands. As it pertains to that, Intel's flagship Core i9-10900K has (supposedly) been shown running at 5.4GHz.
This comes by way of a screenshot posted to China's Baidu forum, and unfortunately, the post has since been deleted. However, Twitter user G2 OldSKol managed to save a copy and upload it to Twitter. The image shows the chip running at 5.4GHz (via CPU-Z) and scoring 3,002 in Cinebench R15. Here's a look at it all... 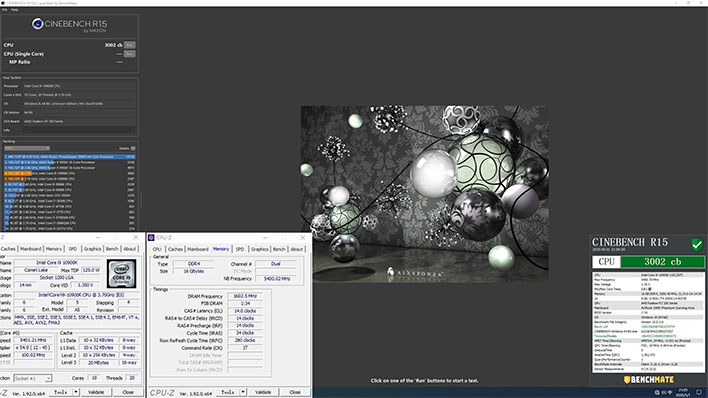 According to the screenshot, the Core i9-10900K is running in an ASRock Z490 Phantom Gaming 4/ax motherboard, accompanied by 16GB of DDR4-3200 RAM (G.Skill). The CPU-Z image shows the processor running at 1.35V with a 125W TDP.
The Core i9-10900K is a 10-core/20-thread processor with a 3.7GHz base clock (or up to 4.1GHz). It has an all-core Turbo clock of 4.8GHz, or 4.9GHz via Thermal Velocity Boost, which punches things up a notch when temperatures allow.
Given the rated TDP and what will likely be required to run at full throttle (and beyond), it's expected that the Core i9-10900K will require some heavy duty cooling to achieve its full potential. Assuming the screen captures are real, it's not clear what kind of cooling was used to hit 5.4GHz (likely liquid cooling at the least).
According to the Cinebench R15 screenie, the overclock gives the Core i9-10900K a nice boost in performance, going from 2,347 at stock settings to 3,002 at 5.4GHz. Of course, sitting right above it is AMD's Ryzen 3950X (16 cores, 32 threads) with a score of 4,973 at stock settings.
That's also a pricier chip, though—the Ryzen 9 3950X sells for $719.99 on Amazon, while the Core i9-10900K carries an MSRP of $488 (we'll have to wait and see how street pricing shakes out).