Flagship processors are supposed to bring the boom, as they are positioned as the best a company has to offer within any particular product lineup. They also command premium prices to match. That's why the performance of more affordable midrange and budget options matters, and some newly leaked benchmarks purportedly give us a hint at the former, by way of Intel's upcoming Core i5-12400.
We still don't know exactly how pricing will shake out. All we can say with reasonable certainty is that the Core i5-12400 will cost less than the Core i9-12900K and Core i7-12700K. As a point of reference, the Core i5-11400 (Rocket Lake) has a recommended customer price of $182, which is for Intel's retail partners that buy in bulk (trays of 1,000 units).
The Core i5-11400 is mostly sold out by first-party sellers, but otherwise went for around $190-$200 when it was more widely available. We suspect the Core i5-12400 will land somewhere within the $200-$250 market, for boxed retail pricing. What does that get you in return, in terms of performance? Let's have a look at some leaked benchmarks...

Over at Bilibili, a user posted some performance metrics from what is allegedly a Core i5-12400 processor. This is the same user who recently posted Core i9-12900K performance data, so apparently they have an inside track on unreleased silicon, assuming these are legitimate (and there's no way to know for sure, obviously).
In Cinebench R20, the purported Core i5-12400 scored 681 in the single-threaded test, and 4,983 in the multi-threaded test. Here's how the single-threaded score compares to what other CPUs typically achieve in the same test...
And here is how the multi-threaded score compares...
Let's talk about specs. According to various past leaks, the Core i5-12400 runs whole hog with Intel's high-performance Golden Cove cores and ditches any power-efficient Gracemont cores, for a 6-core/12-thread configuration. It also supposedly features 18MB of L3 cache, and boosts to 4.4GHz on a single core, and 4GHz across all six cores.
The relevant comparison in AMD land is the Ryzen 5 5600X, and a $299 chip with a 6-core/12-thread configuration and 32MB of L3 cache, clocked at 3.7GHz to 4.6GHz. Compared to that part, the Core i5-12400's single-threaded score is 12.7 percent higher, and its multi-threaded score is 10.1 percent higher.
Not too shabby, though obviously AMD is not standing pat—it has a Zen 3 refresh in the works with stacked 3D V-cache that is claimed to deliver a 15 percent performance boost in certain workloads (gaming), and eventually Zen 4 will be out. But those are comparisons for another day. 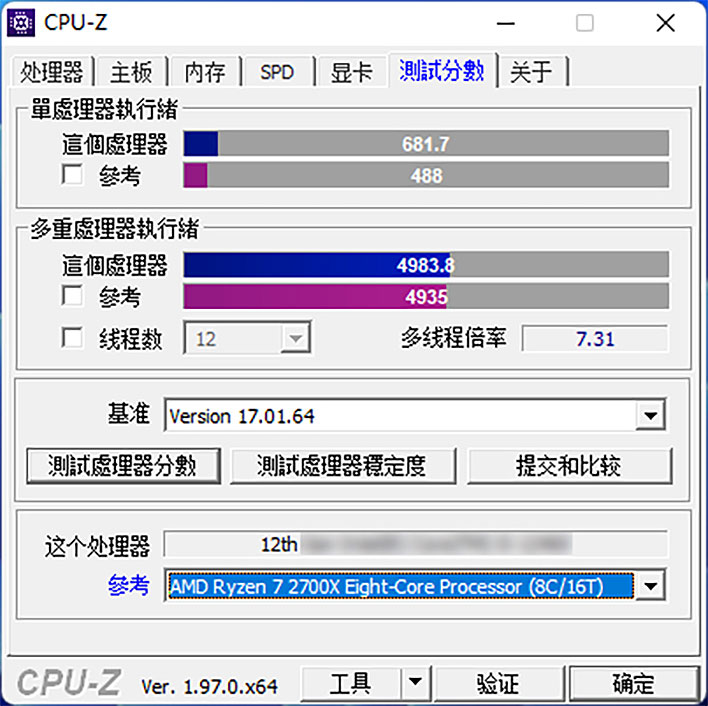 The user also posted CPU-Z scores for the Core i5-12400. According to the shared screenshot, it scored 681.7 in the single-threaded test, and 4,983.8 in the multi-threaded test.
Looking at CPU-Z's database of validated scores, the highest one is 682 for a Core i9-11900K. The Core i5-12400 virtually ties that high result. Meanwhile, the Ryzen 5 5600X scores 624 in the same test. So that's a 9.2 percent advantage for the midrange Alder Lake CPU, based on this particular benchmark run.
In the multi-threaded test, the Ryzen 5 5600X lands at 4,811 among the validated results for 12-thread CPUs. The Core i5-12400, as depicted here, ekes out a 3.6 percent margin of victory.
We can only glean so much from leaked scores, and one thing we absolutely can't do is take them at face value. As always, we'll have to wait for finalized silicon and accompanying platforms to arrive, with scores of our own to paint an accurate picture of performance.
That said, if these scores translate to finalized silicon, things could get interesting in a hurry, especially if Intel opts to price the Core i5-12400 close to $200 (or even under, if it wants to make a statement). That could prompt a price drop by AMD for its Ryzen 5000 series, though we'll have to wait to see what actually happens.