Benchmark leaks purporting to give us a performance glimpse of Intel's upcoming 11th Gen Core desktop processors based on Rocket Lake are kind of all over the place. One of the more recent ones falls on the encouraging side of the spectrum. That's because it supposedly shows a Core i5-11400 processor putting the beat down on a current-generation Core i5-10400 in single-threaded performance.
The usual disclaimers apply when examining benchmark leaks of unreleased products—a variety of factors can alter the results, including clockspeeds (is the chip overclocked or running at stock?), drivers, supplementary platform components, and so forth. We also caution against reading too much into a single benchmark run.
All that said, Rocket Lake-S is an intriguing blip on Intel's CPU roadmap because it is the biggest architecture upgrade in several years, even though it is another iteration of 14-nanometer production. It features Cypress Cove cores that are basically a 14nm back-port of the Sandy Cove cores used in Intel's 10nm Ice Lake CPUs.
According to Intel, its Rocket Lake-S stack will deliver up to a 19 percent increase in IPC (instructions per clock) performance over Comet Lake-S. Incidentally, that is same uptick AMD claimed with its Ryzen 5000 series CPUs based on Zen 3.
Will shipping Rocket Lake-S CPUs deliver on Intel's promise? That remains to be seen, but in the meantime, check out this encouraging benchmark run... 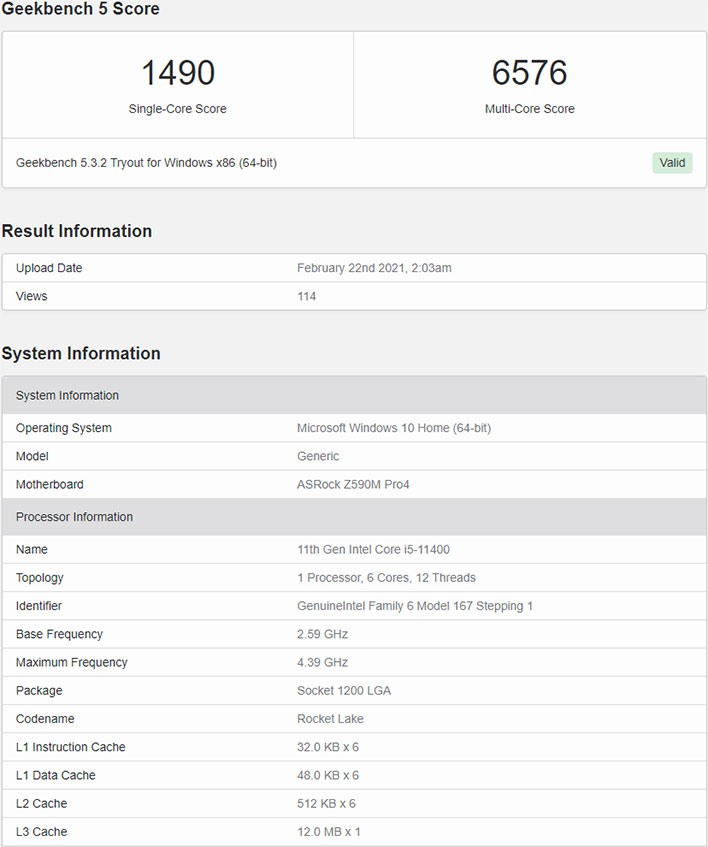 According to the benchmark entry, the Core i5-11400 is a 6-core/12-thread CPU with a 2.6GHz base clock and 4.4GHz turbo frequency. It is also wields 12MB of L3 cache. The chip was nestled into an ASRock Z590M Pro4 motherboard based on Intel's new Z590 chipset, flanked by 16GB of DDR4-2133 RAM, which is rather slow.
The pokey RAM did not hold the CPU back, though, at least in the single-core test. It scored 1,565 in the single-score test and 6,220 in the multi-core test. If we direct our attention to Geekbench's collection of average scores for various CPUs, the Core i5-11400 scored nearly 34 percent higher than Intel's 10th Gen Core i5-10400 in the single-threaded benchmark run.
That is what you would call a smack down. The Core i5-11400 did not leave the Core i5-10400 quite as far behind in the multi-core portion of the benchmark, but still came out ahead by more than 16 percent. That is impressive stuff.
Things were a lot tighter when comparing against AMD's Ryzen 5000 series. The average single-core score for a 6-core/12-thread Ryzen 5 5600X is 1,614, which is just over 3 percent better. And in the multi-core test, the collection of Ryzen 5 5600X scores on Geekbench average 8,150, which is almost 24 percent higher.
That is a surprising gap, given how close the single-core scores are to one another. Perhaps that is where slower frequency RAM is having a bigger impact on performance. Of course, we'll have to wait and see how Rocket Lake-S actually pans out when finalized silicon finds its way into the marketplace and into our own hands for evaluation. Stay tuned.