Intel's 11th generation Rocket Lake-S processors are on deck to launch during Q1 2021, and excitement is building. Leading up to the official launch, Intel has been dropping hints about the new processor family's performance compared to AMD's lineup of Ryzen processors.

Today, Intel gives us a very early preview of how the storage subsystem will fair against systems using AMD's Zen 3-based Ryzen 5000 processors. In this case, Intel is touting its alleged superior PCIe 4.0 performance with its upcoming flagship Core i9-11900K against AMD's flagship Ryzen 9 5950X. Intel paired its processor with an ASUS Z590 ROG Maximus XIII Hero motherboard, while the AMD processor was coupled with an ASUS X570 ROG Rampage VIII Hero. That last point is somewhat curious because we can't find any online references to the X570 ROG Rampage VIII Hero. 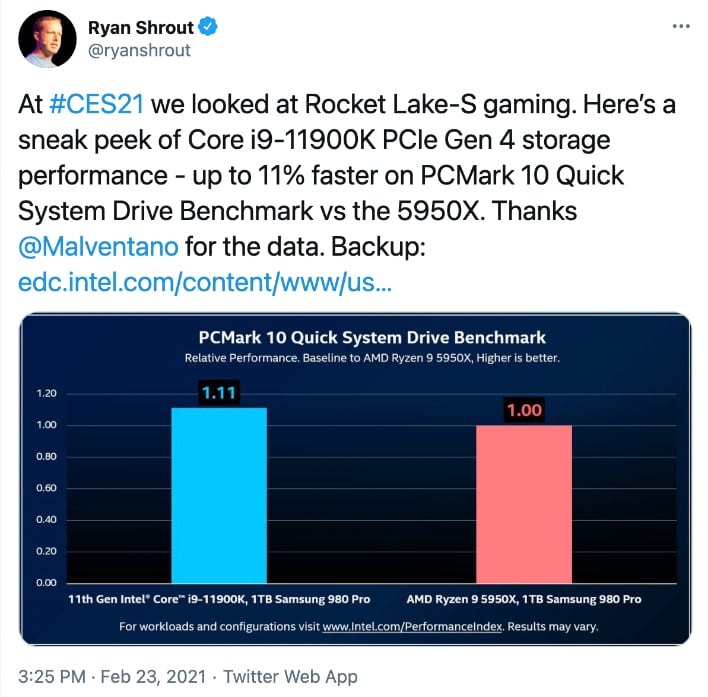 Both platforms used a Samsung 980 Pro SSD, which HotHardware reviewed here, along with 32GB DDR4-3200 memory and a GeForce RTX 3090. Intel says that it used one of its own 760p SSDs with Windows 10 20H2 installed to run the tests. Using a Samsung 980 Pro SSD that 50 percent full, Intel says that the Intel system offered up 11 percent faster performance in the PCMark 10 Quick System Drive Benchmark.

Intel's Ryan Shrout went to clarify on Twitter that both systems had the Samsung 980 Pro SSD attached to an "x16 slot with a riser card to make sure it was CPU attached on both platforms" to level the playing field.

However, this is just one benchmark, and Shrout never followed up to responses in the Twitter thread asking for an explanation about the motherboard used with the Ryzen 9 5950X (perhaps Intel meant to say ROG Crosshair VIII Hero). And the PCMark 10 Quick System Drive Benchmark is a relatively short test that does not genuinely indicate real-world usage patterns. So, while we are initially intrigued by an 11 percent performance boost, your mileage may vary, and we'll be waiting to conduct more extensive storage tests.

We also must remember that Intel uses percentages to compare the two systems, so we don't have any hard numbers on-hand. With that said, the Samsung 980 Pro SSD is rated for sequential reads/writes of 7,000MB/sec and 5,100MB/sec, respectively, and uses Samsung's own Elpis SSD controller.

It won't be long before the Core i9-11900K is in our hands (along with the rest of the Rocket Lake family), so we'll be able to see once and for all which processor is the true king of the hill in the desktop market across our full suite of benchmarks.