During today's Intel InnovatiON event, the chip maker covered a variety of topics across a range of product and service categories. Alder Lake is of course the major news today, as it gets off the ground with the first batch of desktop SKUs. But one of the more interesting nuggets from the event was the state of Moore's Law, and whether it's still relevant and attainable.
Intel's answer? Yes, and 'Oh hell yes', if we're allowed to paraphrase. Intel CEO Pat Gelsinger made some resounding statements about Moore's Law, and how the company will not only stay on track for the foreseeable future, but even bend the curve to its advantage, outpacing the prediction that was made so many decades ago.
What exactly is Moore's Law? It dates back to 1965 when Intel co-founder Gordon Moore, who at the time was working at Fairchild Semiconductor, predicted that the number of transistors in a microchip would continue to double every year. He would later revise this prediction to every two years, and while his observation was more nuanced, it has served as a sort of benchmark for Intel after it was formed and over the course of the next 50 years.
"From careful observation of an emerging trend, Moore extrapolated that computing would dramatically increase in power, and decrease in relative cost, at an exponential pace. The insight, known as Moore’s Law, became the golden rule for the electronics industry, and a springboard for innovation," Intel states on its website. "As a co-founder, Gordon paved the path for Intel to make the ever faster, smaller, more affordable transistors that drive our modern tools and toys. Even over 50 years later, the lasting impact and benefits are felt in many ways."
Next month will mark the 50th anniversary of the 4004, which is recognized as the first commercially-produced general purpose microprocessor. This is very much a different era of computing, but according to Gelsinger, Moore's Law is every bit as relevant now as it was in much earlier days.
The 4004 was a 4-bit CPU clocked at 740 kilohertz, and now Intel is delivering hybrid Alder Lake processors with up to 16 cores and 24 threads, clocked at up to 5.2GHz with support for the latest technologies (DDR5, PCI Express 5.0, and so forth) and based much more advances manufacturing processes. 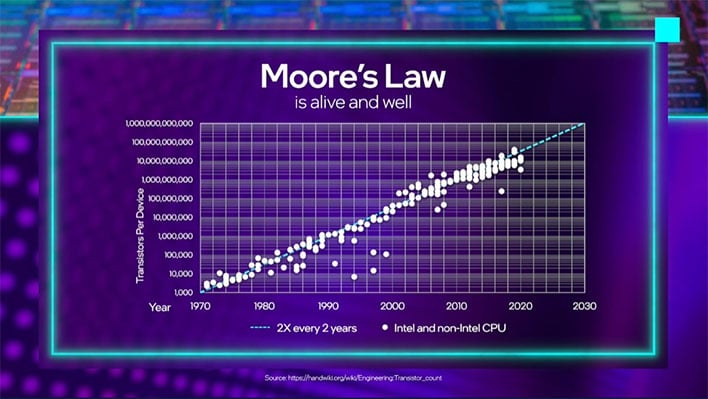 During the event, Gelsinger reiterated that Intel has shifted to a new node naming scheme, as from Intel's vantage point, the nanometer measurement is less important than ever, as it applies to how advanced a particular architecture might be. Today's and tomorrow's chips sport different types of transistors optimized for different types of needs.
With Intel's RibbonFET technology, the company is able to separate the gate from the underlying silicon. This paves the way for a reduction in leakage current. Intel's also able to design with higher and thicker ribbons to extract more power, if needed. And looking past RibbonFET, Intel envisions more stacking schemes and other techniques to keep Moore's Law going.
"Today we are predicating that we will maintain or even go faster than Moore's Law for the next decade," Gelsinger said, acknowledging that he made a "profound and bold statement."
According to Gelsinger, EUV offers up a "clean path of lithography" to maintain Moore's Law. He notes that the most difficult aspect of semiconductor innovation has always been lithography, but with RibbonFET, Intel sees a clear path for sustained improvements. In addition, PowerVIA and and especially packaging technologies will drive innovation. Packaging in particular is something Gelsinger said was understood as important from the every beginning, with Moore's saying as much in his original paper.

"We are entering a period of sustained, if not Super Moore's Law. We expected to even bend the curve faster than a doubling every two years, and we will not rest until the periodic table is exhausted. We as the stewards of Moore's Law will be relentless in our path to innovate and the magic of silicon. Like I said, Moore's Law is alive very well," Gelsinger said.
A bold statement indeed. That's one heck of a sound byte, and now it's up to Intel to execute on its roadmap and prediction outlined at its InnovatiON event. Alder Lake is a start, and we'll see how things go next year and beyond.