We don't expect a whole lot from a sub-$50 processor, and we most certainly would not anticipate it hanging with a CPU that costs $400 more, let alone beating it. But that's precisely what a leaked benchmark run shows in regards to Intel's least expensive desktop processor based on Alder Lake, the Celeron G6900. With a caveat (more on that in a moment).

The Celeron G6900 is one of the newest additions to the Alder Lake family, which was unveiled alongside a host of other SKUs (both desktop and mobile) during Intel's livestream event just ahead of the Consumer Electronics Show last week. The recommended customer pricing (RCP) is $42, which is the quote for trays of 1,000 units. Retail pricing is generally a bit higher than the RCP, though usually not by a ton, and sometimes not at all.
In any event, it's a cheap chip. That's also reflected in the specifications, with this being a dual-core slice of silicon. This is one of those CPUs that rolls solo with P-cores (Golden Cove) rather than a mix of P-cores and E-cores (Gracemont). It also runs at a steady 3.4GHz (there's no turbo frequency) and has 4MB of L3 cache, 2.5MB of L2 cache, and a 46W processor base power (PBP) rating (basically the new name for TDP).
You're not going to hammer through heavy-duty, multi-threaded workloads in same manner as a higher end CPU will allow. But it does deliver Intel's Alder Lake architecture in a relatively inexpensive package. It also seemingly boasts strong single-core performance, as evidenced in a leaked Geekbench result. 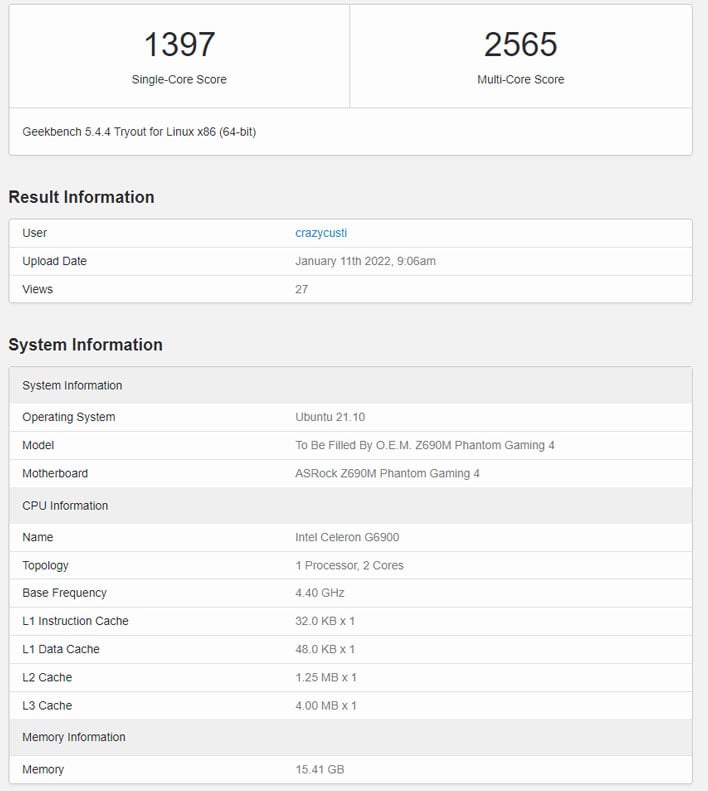 The Geekbench listing shows the Celeron G6900 nestled into an ASRock Z690M Phantom Gaming 4 motherboard with 16GB of DDD4 memory. It scored 1,403 in the single-core test and 2,577 in the multi-core test.
To put that single-core test into perspective, it's higher than the 1,374 score we achieved with the Core i9-10900K, which we posted in our Core i9-11900K review. We have more recent CPU samples in our Alder Lake performance review, and while the Celeron chip doesn't notch any victories against its brethren or Rocket Lake, or AMD's Zen 3 CPUs, it's not all that far behind.
The caveat is that the Geekbench listing shows the Celeron G6900 running at 4.4GHz. If that is not being misread by Geekbench, then it's likely the user took advantage of ASRock's Base Frequency Boost feature, which bumps up the base frequency on non-K series processors.
We don't want to draw any conclusions because too much is unknown. For example, was it really overclocked? And if so, what kind of cooling was used? Did it run stable? Questions aside, though, this is potentially promising. It also bodes well for cheaper Alder Lake CPUs like the Core i3-12100F, which is a quad-core CPU that runs at 3.3GHz to 4.3GHz, with 12MB of L3 cache, 5MB of L2 cache, and a $97 RCP.