Intel Banged Out Its Best Revenues In Company History, Warns Chip Shortage Will Last Into 2023

Intel ended its fiscal year with a bang by raking in $20.5 billion in the fourth quarter, the most quarterly revenue ever in the more than 50 years the company has existed. The strong finish pushed Intel's full-year revenue to $79 billion, which is also the company's most ever. Talk about a good start for Pat Gelsinger, who returned to Intel and took the reins as CEO in February 2021.
Those revenues positioned Intel deep into the black, with net income totaling $4.6 billion during the fourth quarter and $19.9 billion for the full year. Both are actually down sequentially and year-over-year, respectively, but Intel's bottom line remains more than healthy. 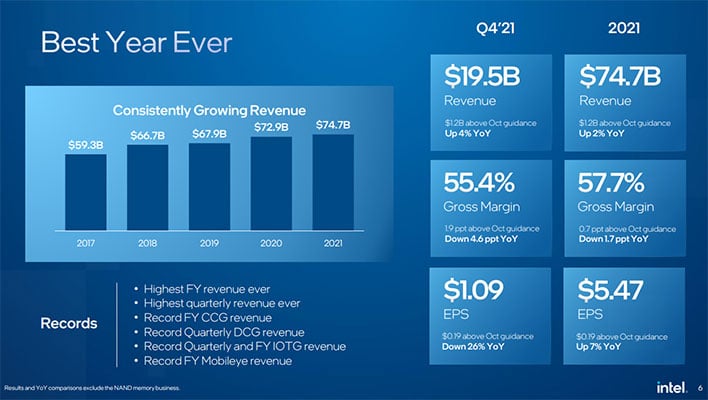 "Q4 represented a great finish to a great year. We exceeded top-line quarterly guidance by over $1 billion and delivered the best quarterly and full-year revenue in the company's history," Gelsinger said in a statement. "Our disciplined focus on execution across technology development, manufacturing, and our traditional and emerging businesses is reflected in our results. We remain committed to driving long-term, sustainable growth as we relentlessly execute our IDM 2.0 strategy."
Gelsinger first talked about Intel's IDM 2.0 strategy in March 2021. It consists of three primary components:

Expanding Intel's internal network of chip fabs, making use of third-party fabs when necessary, and establishing Intel Foundry Services to service external customers across the globe. This has been put into action with extensive investments in new and upgraded fab sites, including the recent announcement that Intel is building a $20 billion mega-site in Ohio. 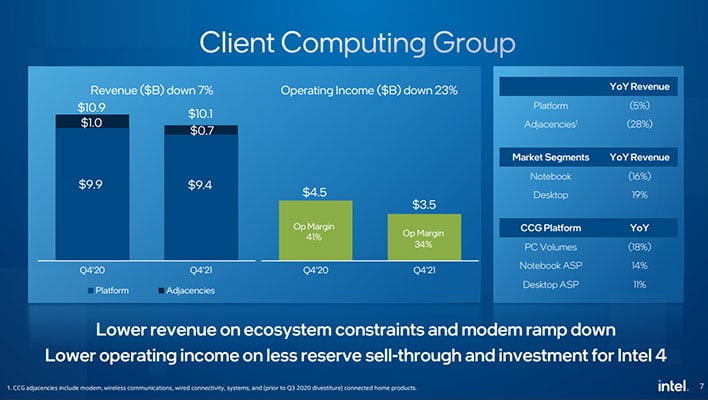 While Intel ended had a fantastic quarter and full-year in terms of revenue, it wasn't all roses and sunshine. Intel's client computing group revenue dipped 7 percent year-over-year to $9.4 billion, while PC volumes fell 18 percent. Notebook volumes bore the brunt of it, probably in part from Apple's switch from Intel chips to its own M1 silicon. However, rises in the average selling price helped absorb the inventory decline.
It will be interesting to see how inventory levels play out with Intel having now launched its Alder Lake platform on both desktop and laptop. And in terms of overall availability from a consumer standpoint, Gelsinger stated during an earnings call that there is "unprecedented demand" but that the industry-wide shortage is likely to last all year long, and then some.
"This unprecedented demand continues to be tempered by supply chain constraints as shortages in substrates, components and foundry silicon has limited our customers' ability to ship finished systems. Across the industry, this was most acutely felt in the client market, particularly in notebooks, but constraints have widely impacted other markets, including automotive, the Internet of Things and the data center," Gelsinger said.
"As we predicted, these ecosystem constraints are expected to persist through 2022 and into 2023, with incremental improvements over this period. The industry will continue to see challenges in a variety of areas, including specialty and overall foundry shortages, substrates as well as third-party silicon," Gelsinger added.
The CEO's comments come after ASUS and TUL reportedly expressed optimism about ramps in substrate production leading to increased graphics card shipments this year. They're not necessarily contradictory statements, though. There can be a ramp in substrate manufacturing while still an overall shortage.
"While constraints will remain, our IDM2.0 strategy affords us a superior position to navigate this environment," Gelsinger said.