You might not of known there exists a place called Licking County, which based on a quick peek on Wikipedia is named after the Licking River, itself believed to be coined for the area's salt licks. Going forward, however, that location in Ohio will be recognizable as the home of Intel's biggest fab site as construction begins on a pair of leading edge chip factories.
Intel will initially invest $20 billion into its first new manufacturing site in 40 years, and will spend another $100 billion on partnerships and education institutions in the region to maintain an influx of talent and bolster its research programs. It's a huge win for the state of Ohio, and it also represents a massive, long-term investment in US manufacturing.
"Today’s announcement is monumental news for the state of Ohio," said Ohio Gov. Mike DeWine. "Intel’s new facilities will be transformative for our state, creating thousands of good-paying jobs in Ohio manufacturing strategically vital semiconductors, often called ‘chips.’ Advanced manufacturing, research and development, and talent are part of Ohio’s DNA, and we are proud that chips—which power the future—will be made in Ohio, by Ohioans." 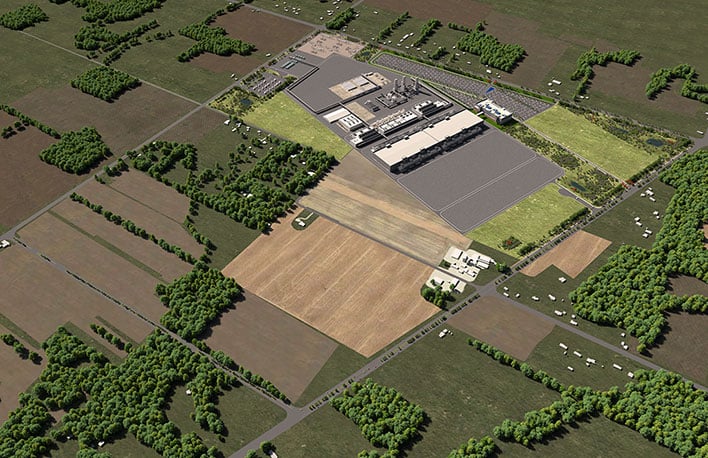 This ranks as the largest private-sector investment in Ohio's history. Intel's new manufacturing site spans nearly 1,000 acres, though it could double in size down the line. In an interview with Time, Intel CEO Pat Gelsinger said he expects the site to eventually become the "largest silicon manufacturing location on the planet" with there being an option to expand the location to 2,000 acres housing up to eight chip plants.
"We helped establish the Silicon Valley. Now we're going to do the Silicon Heartland," Gelsinger said.
At the outset, this effort will create 3,000 jobs at Intel and 7,000 construction jobs. Looking at the picture more broadly, Intel anticipates the fab site leading to tens of thousands of additional long-term jobs within an ecosystem of suppliers and partners.
Construction on the first fab will begin later this year, and Intel expects to flip the switch on production of "the industry's most advanced transistor technologies" in 2025. That suggests the plant will crank out chip based on whatever node comes after Intel 20A, the first manufacturing process of the angstrom era. Assuming everything stays on track, Intel 20A will deliver "breakthrough innovations" in the first half of 2024 with a new RibbonFET transistor architecture.
Just as importantly, the new fab site could help prevent future chip shortages like the one that exists now. It's likely the current shortage will persist, to some extent, through the entirety of this year.

"Today’s investment marks another significant way Intel is leading the effort to restore US semiconductor manufacturing leadership," Gelsinger said in a statement. "Intel’s actions will help build a more resilient supply chain and ensure reliable access to advanced semiconductors for years to come. Intel is bringing leading capability and capacity back to the United States to strengthen the global semiconductor industry. These factories will create a new epicenter for advanced chipmaking in the US that will bolster Intel’s domestic lab-to-fab pipeline and strengthen Ohio’s leadership in research and high tech."
This also plays into the IDM 2.0 strategy Gelsinger has repeatedly discussed. The investments into manufacturing are viewed as key in regaining process leadership—Gelsinger recently stated that Alder Lake left AMD in the rearview mirror, claiming it will stay there going forward. We shall see.