Intel's published a reviewer's guide for folks taking a look at its recently-released high-end mobile GPUs, the Arc A730M and Arc A770M. We can't publish the guide, or any part of it, so we won't. Intel did give us the go-ahead to talk about some of the contents of the guide, though, and the most interesting part by far are Intel's performance benchmarks. 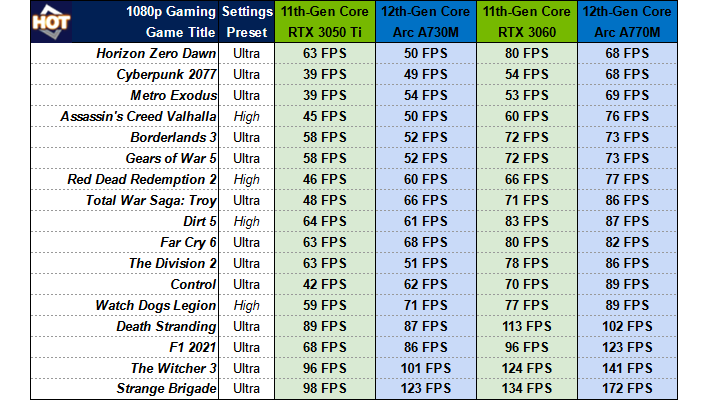 Something that may escape your notice at first is that Intel tested its own graphics processors in a platform with a 12th-generation Alder Lake CPU, while the competing GeForce cards were tested in laptops with 11th-Gen CPUs. We understand why this is the case; these are likely the laptops that were available when Intel was doing its testing.


It's still an odd look, though, especially considering the performance advantage that the 12th-gen chips confer in power-limited situations like a laptop, to say nothing of the fact that the Arc processors can probably leverage their Deep Link Dynamic Power Share (the equivalent of AMD Smartshift.) 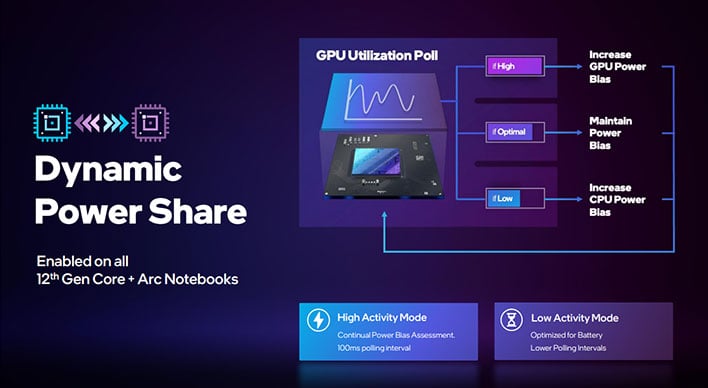 All the same, despite their significant platform advantage, Intel's GPUs don't win across the board. While Intel carves out handy wins in Cyberpunk 2077, Metro Exodus, Borderlands 3, Total War, Control, Watch Dogs: Legion, F1 2021, The Witcher 3, and Strange Brigade, in a number of the other games it struggles or outright loses against the matched GeForce part. Many of the games where Intel takes away its clearest wins are also very heavy on CPU, including Strange Brigade, F1 2021, Total War Saga, and Borderlands 3.

We absolutely have to give Intel kudos for publishing the benchmarks where it didn't come out on top, because it would have been easy for the company to simply exclude them. We also have to give it credit for pointing out that the Intel chips were on a newer platform right on their graph; we didn't have to dig into the testing methodology to figure that out.

Taking the data at face value, it does look like the Arc chips could be contenders against their NVIDIA competition, though it's obviously difficult to really make any judgements about these benchmarks until we've tested the hardware ourselves. Furthermore, we have to note that these are just 1080p benchmarks, and the A770M is likely to be Intel's fastest mobile GPU.

The productivity side of things looks considerably more rosy. Not only does Intel come out on top in every benchmark, in some cases it's by a huge margin. Even if Arc doesn't sweep the benches at gaming, it might make a very attractive option for people who want a laptop to use for both productivity tasks as well as gaming.

Besides the three benchmarks above, Intel also notes that its Arc GPUs can transcode AV1 video at "over 60 FPS". If you've ever tried to transcode something to the AV1 codec, you'll know that that's a tremendous boon, as even top-end twelve- and sixteen-core CPUs struggle to break into the double digits with AV1 encoding.

As we've said before, the delays have put the Arc GPUs based on the "Alchemist" first-gen Xe-HPG architecture in a really sore spot. Intel's already struggling to compete with Ampere and RDNA 2, and those chips' successors are riding low on the horizon already. Intel might be able to position Arc as an entry-level-to-midrange option for enthusiasts, then make another stab at the higher-end segments of the market with "Battlemage", but we'll need those cards to hit the market, first.