Thanks to Intel's upcoming entry with Arc "Alchemist," things are about to get interesting in the discrete graphics market. NVIDIA is by far the leader when it comes to penetration, commanding roughly 80 percent of the discrete GPU market, with AMD accounting for the remaining 20 percent.

While Intel's entry with Arc is exciting, the company will have to produce results when it comes to performance. Previous rumors suggested that the most potent version of the first-generation Intel Arc graphics cards would top out with 512 execution units. An engineering prototype with 448 EUs showed up earlier this year which put Arc within spitting distance (5 percentage points) of the GeForce RTX 3070 in performance.

The newest leak seemingly adds fuel to the GeForce RTX 3070 fire, as reliable hardware leaker Greymon55 indicated on Twitter that they came across confidential internal slides that show Intel's performance targets for Arc. According to these slides, Arc cards will be available in SKUs ranging from 175 to 225 watts, with performance targeting the GeForce RTX 3070 and the Radeon RX 6700 XT. That is squarely in the mainstream segment of the discrete graphics market and is a good jumping-off point for first-generation gaming cards.

We don't think that anyone expected Intel to come out guns blazing with a card that would topple the GeForce RTX 3080 Ti or Radeon RX 6900 XT. Still, Intel has plenty of opportunities to flex its muscles with second-generation Battlemage and subsequent Celestial and Druid successors. 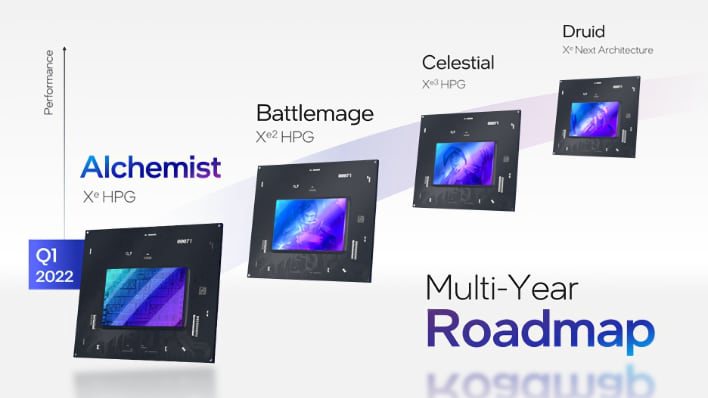 Intel recently confirmed that it would cater to gamers by including overclocking support baked right into Arc drivers to "push the hardware to the limit." Intel Arc graphics cards will also support all the DirectX 12 Ultimate API features, including real-time ray tracing and mesh shading. Intel is also fielding its Xe Super Sampling (XeSS) AI-based upscaling technology to compete with NVIDIA DLSS 2.0 and AMD FidelityFX Super Resolution.

The first-generation Arc cards will be built on TSMC's 6nm (N6) process node and are expected to offer a 50 percent performance-per-watt uplift over the preceding Xe design.