While it may still be hard to purchase a discrete graphics card on the retail market, that doesn't mean that production or shipments of GPUs have stagnated. It's actually quite the contrary, as the latest figures from Jon Peddie Research show that the overall GPUs shipments rose during Q2 2021.

During Q2, the overall global shipments of GPUs reached 123 million units, which grew 3.4 percent compared to Q1 2021 and 37 percent year-over-year. However, JPR noted that this quarter-over-quarter increase is out of character, as Q2 shipments typically trend down compared to Q1. 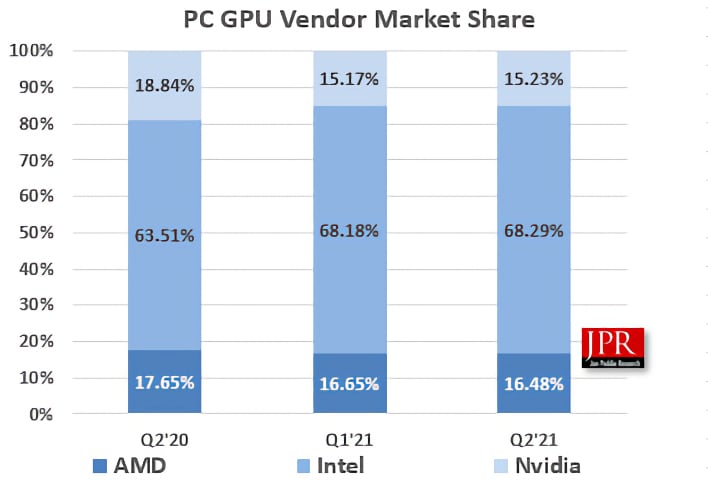 These figures account for all GPU shipments, including integrated GPUs built into Intel Core CPUs and AMD Ryzen APUs. In the discrete graphics market, it's a similar situation with AMD steadily losing market share. In Q2 2020, NVIDIA and AMD stood firm with an 80 percent and 20 percent share, respectively, of the discrete graphics cards market. However, by Q2 2021, AMD's share had fallen to just 17 percent, according to JPR.

For all the strides that AMD has made over the years with outright performance, including its most recent Radeon RX 6000 RDNA 2 family, it still can't seem to put a sizable dent in NVIDIA's dominant position in discrete graphics.

AMD could find itself under even more pressure a year from now when the Q2 2022 numbers are revealed. Intel will launch its discrete Arc (Alchemist) graphics cards during Q1 2022. Intel plans an entire family of scalable Arc graphics cards, which could potentially do more harm – market share-wise – to AMD than to NVIDIA.