We are incredibly eager for Intel to launch its first modern discrete graphics card, if for no other reason than to put all these leaks and rumors to rest. That day will come, just not today. Instead, an alleged Arc Alchemist entry has been added to the Ashes of the Singularity benchmark database, and at first glance it appears to be equally as fast as a GeForce RTX 3080 Ti.
That would be quite the accomplishment, given that the 3080 Ti is only one peg removed from NVIDIA's flagship offering (at least until the GeForce RTX 3090 Ti materializes). It would also mean that previous rumors suggesting Intel's top Arc product would be roughly on par with a GeForce RTX 3070 or 3070 Ti were overly tempered. But is that really the case?

The presumed Arc Alchemist listing in the AOTS database highlights an unspecified "Xe Graphics" part scoring 12,500 at the Medium_1080p setting, and averaging 126.9 frames per second. It's a relatively safe bet this is a discrete card, given that it's running alongside a Core i9-12900K desktop processor (and 32GB of RAM). 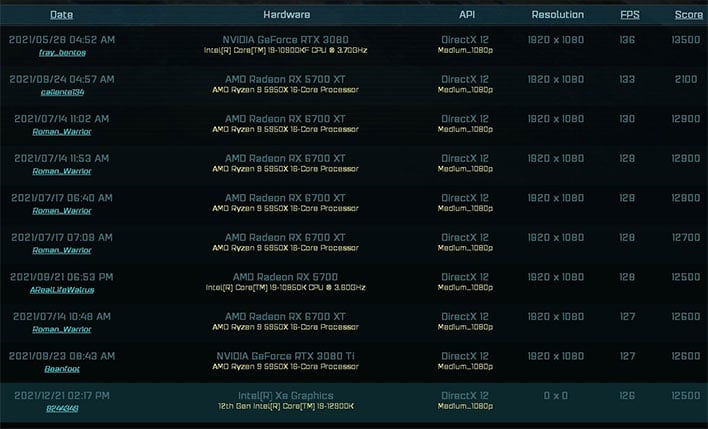 Hat tip to @TUM_APISAK for spotting this entry and the subsequent comparison, which puts the Arc Alchemist card behind a GeForce RTX 3080 Ti by only a single FPS. But here's the thing—the AOTS database is a terrible place to make performance comparisons. There are too many unknown variables that can dramatically affect scores, hence the reason why the same screenshot shows a Radeon RX 5700 besting the 3080 Ti.
From a performance comparison standpoint, it's a meaningless entry. However, it's not a completely worthless one. It at least hints that Alchemist is still on track for an early 2022, just as Intel keeps saying. And it suggests the card should be reasonably fast, which is not something we could necessarily assume if the benchmark entry showed a much lower score.
Time will tell if those assertions are true. In the meantime, we know that Intel's upcoming flagship will sport 32 Xe cores, each which will feature 16 vector engines for 512 vector engines in all. Intel also recently reiterated hardware support for real-time ray tracing, mesh shading, variable rate shading, and dedicated matrix engines (up to 16) for AI acceleration.

We're hoping it ends up a fast card, even if not quite as fast as a 3080 Ti. Just as importantly, we're crossing our fingers the upcoming launch will have a meaningful impact on the GPU shortage.