The rumor mill continues to churn concerning the state of Intel's discrete Arc GPUs. The latest murmurings from Moore's Law Is Dead (MLID), is that the fate of Arc has been sealed, and Raja Koduri fired off two tweets in response.

There is no question that the journey of Intel's Arc discrete graphics has been rough. Multiple delays, an extremely late launch for the A380 desktop GPU, and a lack of a launch date for its A5/7 series desktop cards have all led many to make assumptions about the ultimate fate of the Arc lineup beyond its Alchemist products. The most recent rumor from MLID suggests a source has confirmed the death of Arc after Alchemist.

After MLID tweeted his "leak", others began responding. One posted that they actually leaked it the day before, while another tweeted their sources were saying "this is fud." Whichever side of the coin you fall on, it has fueled the debate about whether or not Intel plans to continue putting money into the Arc department beyond its current Alchemist variant. 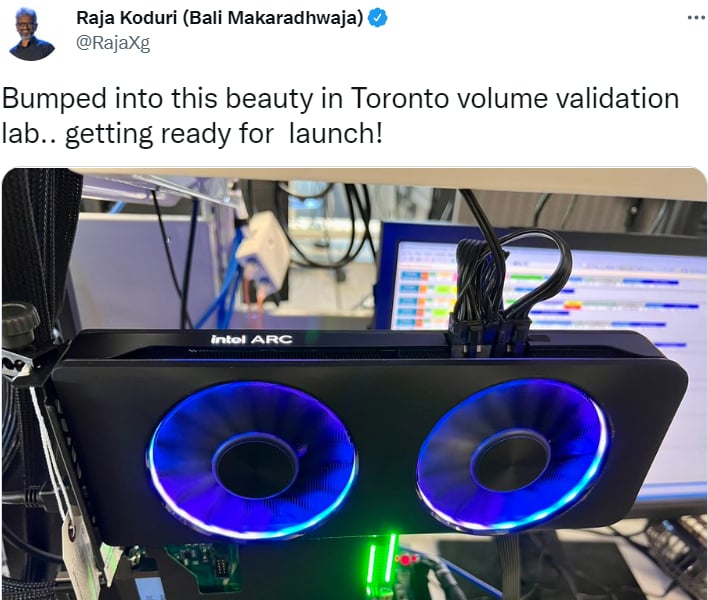 Shortly after MLID's tweet, Intel's Raja Koduri tweeted a photo of an Arc A770 LE at the Toronto volume validation lab and stated, "getting ready for launch!". Some took this a response to the rumor, and that Raja was basically debunking it with his photo. Others decided to stick to the rumor mill and pointed out that his post didn't address the rumor, it only proved Alchemist is still a go.

However, Raja did end up following up his first tweet with a more directed response. He indicated that those at Intel were just as clueless about the rumor as anyone else, and that rumors do nothing but harm those who are working hard to make the product ready for market. While the tweet still falls short of saying the rumor is simply not true, Raja finished it up saying, "we are still in first gen and yes we had more obstacles than planned to overcome, but we persisted..."

It is always suggested to take any rumor or leak with a grain of salt. While it may hold some truth, it could be completely wrong. The fact is, nothing is certain until Intel makes an official announcement. Intel is in a very precarious position with its Arc development. While there may be reasons for the company to cut its losses and move on, there are just as many reasons for it to stick with it and see it through. As Raja pointed out, this is just the first generation and issues were expected.

Time will ultimately tell the future of dedicated graphics cards in terms of Intel. Many of us have been waiting, impatiently at times, for the tech giant to give a release date for its higher end GPUs. Until that day comes, rumors are bound to continue and cause a stir amongst the community that is waiting for something "official" to be announced. Hopefully the wait won't be much longer, as Ryan Shrout and Tom "TAP" Petersen have recently stated, the launch for Arc A5/7 GPUs is "soon," "very, very soon."