For the past several years, Intel has been working fervently to get back into discrete graphics, a market segment the company has not attempted to enter since its Larrabee product over a decade ago. These things take time, no matter how impatient we as consumers can be. That said, Intel is finally well on its way with its first round of Arc Alchemist GPUs arriving on mobile platforms imminently, promising interesting, innovative new features for laptops. And as such, some early Arc mobile benchmarks have surfaced.

The machine on tap is an Intel Arc reference platform laptop from MSI. Intel supplied the laptop to Dave Altavilla, HotHardware's Editor In Chief, for coverage in his column at Forbes. This opened the door for us to take a look at and evaluate his benchmark data obtained outside of Intel's labs, for public consumption. Essentially what we're looking at here is an Intel Arc mobile graphics performance preview, and you can catch Dave's full coverage over at his column at Forbes as well.
This particular configuration is an Alder Lake machine sporting a 12th Gen Core i7-12700H processor with 6 P-cores, 8 E-cores, and 20 threads clocked at up to 4.7GHz (max Turbo frequency), with 24MB of L3 cache. It also features 32GB of DDR5-5200 memory in a dual-channel configuration. 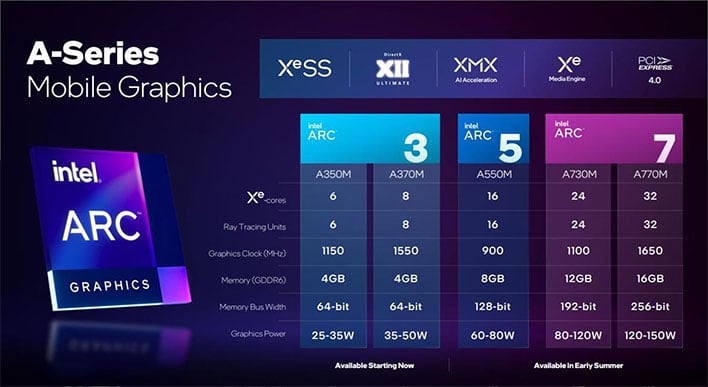 As for the graphics, the reference laptops wields Intel's Arc A370M discrete GPU. This is the slightly higher-end of the two entry-level Arc 3 series GPUs, the other being the A350M. The A370M is comprised of 8 Xe cores, 8 Ray Tracing units, and has 4GB of GDDR6 memory tied to a 64-bit memory bus.
Here's a look at the A370M die, all cleaned up and looking spiffy for the camera... 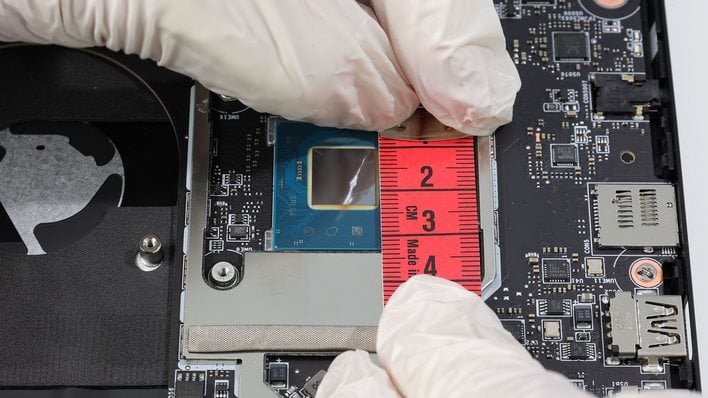 We've already seen some retail listings for laptops touting the A370M, including a 15.6-inch ASUS Zenbook Flip and 16-inch HP Spectre, both of which are 2-in-1 devices. They're not yet available to buy in the US, but have been added to Best Buy's online catalog with the "Coming Soon" designation.

Scanning the benchmarks at Forbes, the Arc A370M looks like a good first effort from Intel. Most of the benchmarks pit the reference laptop against a Dell XPS 15 with a Core i7-11800H CPU and discrete GeForce RTX 3050 mobile GPU, and an ASUS Zenbook S 13 OLED with a Ryzen 7 6800U CPU and integrated Radeon 680M graphics based on RDNA 2. Some of the benchmarks also include Apple's MacBook Pro 13 with an M1 chip (4+4 config).
In essence, the A370M in the reference laptop got pitted against the fastest IGP on the market (Radeon 680M), and a lower end discrete GPU, the RTX 3050 mobile. That's not actually the slowest mobile GPU on the market (not by a long shot), but is the lowest end RTX 30 series GPU in laptop form.

It was the same thing across a handful of gaming benchmarks—the A370M consistently trailed the RTX 3050 and beat the Radeon 680M. We can see this above in Final Fantasy: Endwalker, where the A370M was nearly twice as fast as the Radeon 680M, but was 31 fps slower than the RTX 3050.

It was the same story in F1 2021, though these benchmarks have added interest because they show the performance impact that enabling ray tracing (medium setting) has on the A370M, at least in this game. At 1080p with the High image quality preset, the A370M dropped from 63 fps to 40 fps after flipping the ray tracing switch. Notably, the RTX 3050 also dipped below the 60 fps threshold with ray tracing turned on, though just barely.

Comparisons aside, the benchmarks provide an interesting picture of 1080p gaming performance. It looks like there will be instances where the A370M can manage 60 frames per second, as it did in F1 2021 at the High quality preset without ray tracing enabled, and it came close in Final Fantasy: Endwalker. But as is typically the case with entry-level graphics solutions, it really just depends on the game and graphics settings. 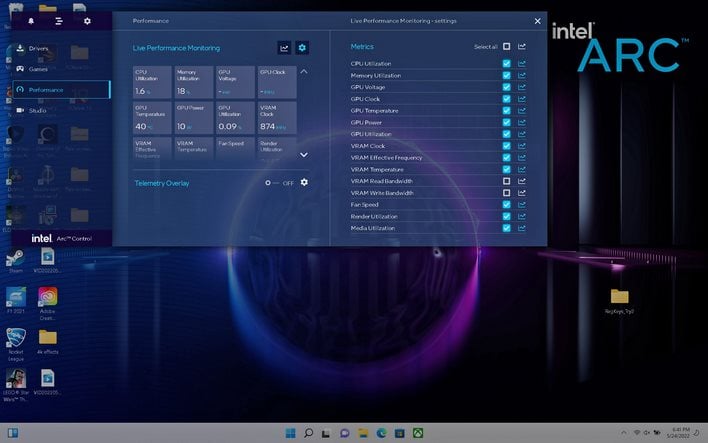 The other part of the equation is software and driver development. Shown above is a screen grab of Intel's Arc Control software running on the reference laptop. This is intended to make it easy to download and install the latest drivers, as well as monitor performance metrics in real time.

It is going to be imperative for Intel's software engineers to stay on top of driver releases with game optimizations, bug fixes, and so forth. Platform drivers have generally been a strong point at Intel, and it will be interesting to see if that carries over its discrete graphics efforts.

It's a bit early for definitive takeaways, but based strictly on the performance displayed by a reference laptop at Forbes, Intel Arc is off to a solid start. That's good news for Intel, and encouraging for consumers.