Intel is on track to launch its first 10nm consumer desktop processors this summer with 12th generation Alder Lake-S, which will then be followed up by a closely related successor: 13th gen Raptor Lake. Intel's 14th gen Meteor Lake processor family comes after Raptor Lake, which is the topic of today's discussion. Intel announced today that Meteor Lake has taped in, which has brought great excitement to the company's entire workforce.

Intel CEO Pat Gelsinger said back in March that the tape-in would occur in Q2, and the company was able to meet that mark. Tape-in occurs with the various components that make up modern processors are combined into a monolithic package. The next step is tape-out when the photomasks are set/finalized and ready to be sent for manufacturing.

Meteor Lake is on track to launch in 2023 using a 7nm Enhanced SuperFin process node for those that need a refresher. It's rumored that Meteor Lake will use Redwood Cove performance cores backed with [currently unnamed] efficiency cores. It was rumored back in November 2020 that the Redwood Cove architecture was designed to be node agnostic, given Intel the flexibility of outsourcing manufacturing to third parties like TSMC if the need arises. 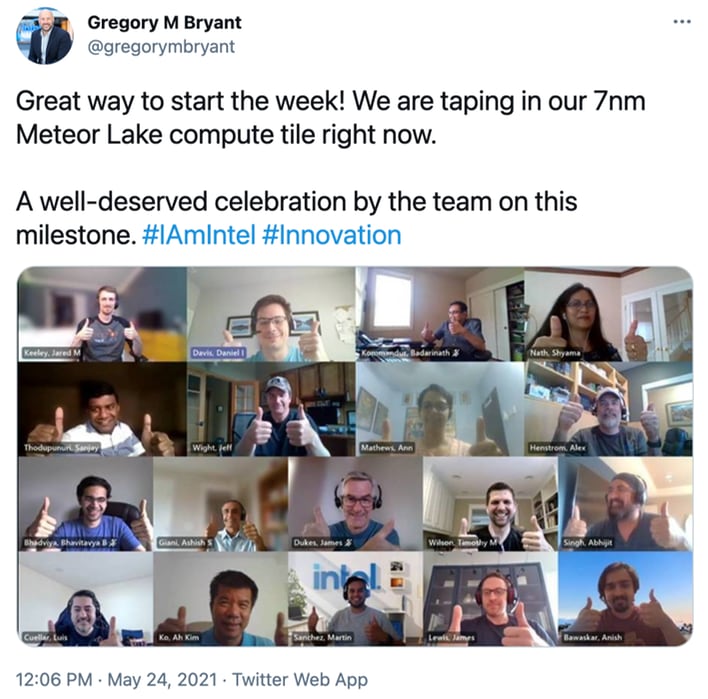 Not much else is known about Meteor Lake at this time other than it will reportedly continue using the LGA-1700 socket that will be introduced with Alder Lake-S later this year. Also on the docket for Meteor Lake is support for DDR5 memory and the PCIe 5.0 interface, which both will be well into the "mature" phase in 2023.

Due to the global chip shortage affecting the availability of chips globally, Intel has committed to investing $20 billion into the construction of two new fabs in Arizona. This is an effort by Intel to hold a "competitive advantage that enables product optimization, improved economics, and supply resilience."

Intel's investment also comes when TSMC is throwing $100 billion at fab expansion over the new three years, and Samsung has committed $151 billion over the next decade to expand chip production in its home market of South Korea.