Time is running out on the bulk of Alder Lake leaks to spark speculation, at least for whatever Intel has on tap for its first wave of CPUs. One of Intel's upcoming 12th Gen Core chips is the Core i5-12600K. Positioned as a mid-range chip, a recent benchmark leak suggests it will deliver high-end performance, punching above the typical Core i5's weight class.
Let's talk specs before we go any further. Built on what was previously known as Intel's 10-nanometer Enhanced SuperFin process (and now called Intel 7), the Core i5-12600K is tipped to be a 10-core/16-thread chip comprised of six high-performance Golden Cove cores with Hyper Threading support and four power-efficient Gracemont cores.
If past leaks are correct, the Core i5-12600K will operate at a 3.4GHz base clock and up to a 4.9GHz Turbo frequency across one or two Golden Cove cores, or 4.5GHz when all the cores are hammering workloads. It is also said to feature 20MB of L3 cache, support DDR5-4800 and DDR4-3200 memory, and have a 125W TDP.

As for the leaked benchmark in question, APISAK (@TUM_APISAK) posted a CPU-Z screenshot with some details partially blurred out. Here's a look.. 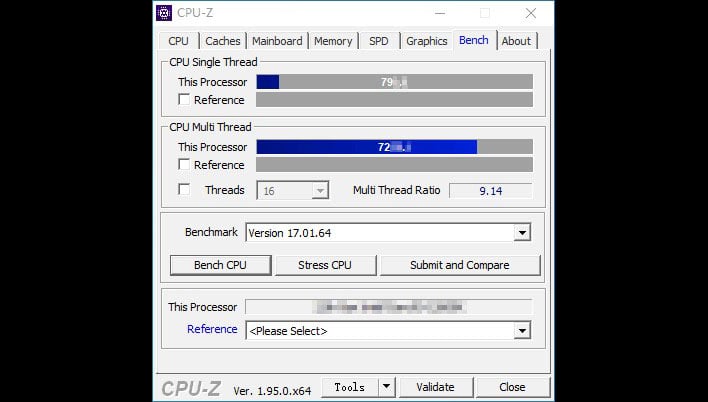 APISAK poses the possibility that this is representative of the Core i5-12600K, though is not sure if the entry is "real or fake." If we assume it is legitimate, it shows the Alder Lake part scoring at least 790 points in CPU-Z's single-threaded test and at least 7,200 points in the multi-threaded test (only the first two digits for both tests are untouched in the screenshot).
Meanwhile, another prominent leaker (HXL, or @9550pro) posted a CPU-Z screenshot that purportedly shows benchmark results for a Core i5-12600K running at stock settings. Here's a look... 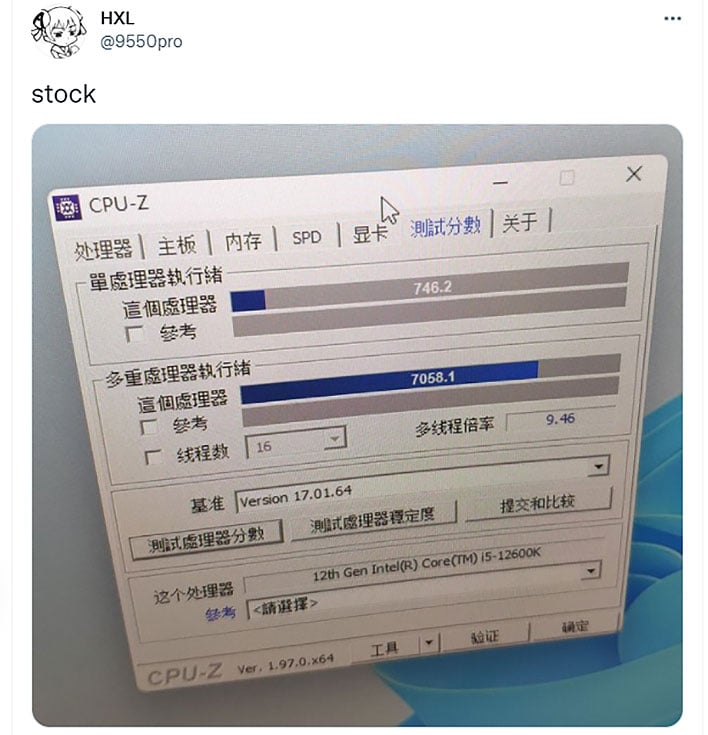 This screenshot shows the Core i5-12600K mustering 746.2 in the single-threaded test and 7,058.1 in the multi-threaded test. They are lower scores than the other purported benchmark run, but still exceptional results, especially if they do in fact represent stock clocks. 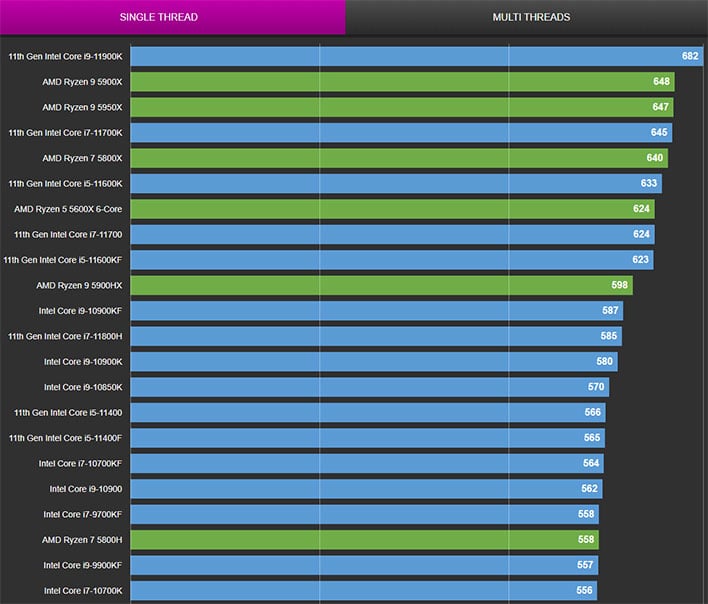 Exactly how good, though? CPU-Z maintains a database of the fastest validated scores for a host of chips, and according to those results, the Core i5-12600K as depicted in these leaks is a beast. Using the scores from stock settings, it wallops AMD's own mid-range darling, the Ryzen 5 5600X, beating it in the single-threaded test by 19.6 percent. It also bests every other Zen 3 chip, and comes out ahead of Intel's Core i9-11900K by 9.4 percent.
For its roundup of multi-threaded results, CPU-Z graphs processors separately based on thread counts. So rather than post a whole bunch of graphs, here's a tidier look at some comparison data...
The Core i5-12600K once again positions itself well ahead of the Ryzen 5 5600X, beating it by an impressive 46.7 percent. It also tops its soon-to-be predecessor, the Core i5-11600K by 49.2 percent, and even claims victory over Intel's current flagship Core i9-11900K by 7.5 percent.
AMD still reigns supreme in multi-core performance overall when factoring in its entire catalog, as its Ryzen 9 CPUs bring more cores and threads to the party. But for a mid-range chip, if these single-threaded and multi-threaded results prove accurate, Alder Lake is going be a big upgrade.
Inevitably, someone will point out that it's unfair to compare Intel's next-gen chips with AMD's current-gen lineup. And yes, it's worth noting that AMD has a Zen 3 refresh in the works, with stacked 3D V-cache added to the mix for a claimed 15 percent jump in performance in some workloads (gaming). And then later in 2022, it will release Zen 4.
Those are all fair points. However, Alder Lake will be out soon (in a few weeks, if past leaks are accurate), and if going by what is actually available when it arrives, it looks poised to flex pretty hard. We'll see.