There are two parts to making a microprocessor. That's obviously an oversimplification, because there are actually a multitude of parts, but the two highest-level are design and fabrication. It's all well and good to design a ludicrously-fast, bleeding-edge processor, but it makes little difference if the fabrication process used to build it goes poorly and you end up with a chip that clocks half as high as you planned, or even worse, has terrible yields (meaning that most of the chips don't work).


Intel's CPUs in the last decade or so have knocked it out of the park on the design side of things, but the fabrication side faced serious struggles when trying to move from the older 14nm process—used for everything from 5th-gen Broadwell up to 11th-gen Rocket Lake—to the newer 10nm process that is now known as "Intel 7." The problems slowed Intel's progress in the performance arena to a crawl, and allowed competitor AMD to catch up from a serious disadvantage. 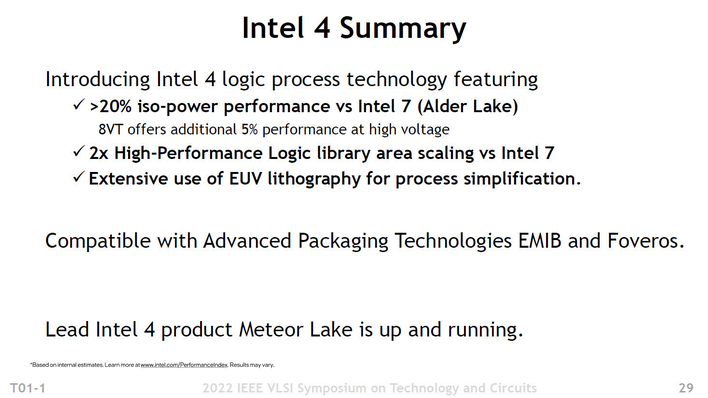 Well, at the Very Large-Scale Integration (VLSI) Technology Symposium, which has been held since 1981, Intel's presenting 13 different papers, most of which are intended to quell anxiety over the company's next-gen fabrication process. As a summary, the company claims its "Intel 4" process will offer a 20% clock rate boost over Intel 7 at the same power, while achieving double the transistor density for logic, although SRAM density only increases by 23%.


Intel accomplishes these achievements by making extensive use of Extreme Ultraviolet (EUV) lithography—the first Intel process to do so. That makes them a bit late to the game, as TSMC and Samsung have both been using EUV for a couple of years now, although you could argue that Intel's continued competitiveness on its Intel 7 process ultimately bodes well for its future efforts.

In terms of power consumed (and thus heat generated), Intel says that its Intel 4 process offers about a 40% improvement at the same clock rate versus Intel 7. With that in mind, it looks like Intel 4 will be a particular boon for low-power and laptop chips, but if we look at the graph, it also looks like Intel 4 could offer much higher frequency scaling for high-powered desktop parts. 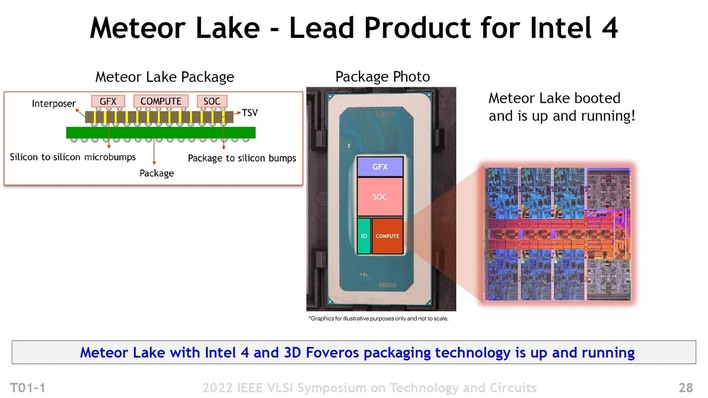 As we already knew, the first products to be produced using Intel 4 will be the company's forthcoming 14th-gen Meteor Lake CPUs. Based on what the company has shown, we're expecting to see those chips crop up in laptops before they appear on the desktop. We've already seen Meteor Lake in its disaggregated silicon glory, and the company says it has samples up and booting Windows already, so they may come shortly after Raptor Lake, early next year.