Intel has a couple of notable events coming up. The first is a webcast scheduled for tomorrow (March 23), in which Intel CEO Pat Gelsinger will discuss a "new era of innovation and technology leadership." Then in a couple weeks from now, Intel is planning to formally introduce its latest 3rd Gen Intel Xeon Scalable processors based on Ice Lake-SP.
Intel's Xeon launch event, titled "How Wonderful Gets Done 2021," is scheduled for April 6 at 8:00 am Pacific (11:00 am Eastern). Intel's Navin Shenoy, executive vice president in the Data Platforms Group, and Lisa Spelman, corporate vice president in the Xeon and Memory Group, will both be on hand to discuss the new processor launches. Gelsinger and others will be there as well.

"The virtual 'How Wonderful Gets Done 2021' launch event will feature Intel executives and ecosystem partners addressing some of today’s greatest business opportunities. The event will also include brief remarks by Intel Chief Executive Officer Pat Gelsinger," Intel says.
It will be an interesting launch, and an important one, as Intel dukes it out with AMD in the lucrative data center sector. AMD just recently rolled out its own big iron for servers, the EPYC 7003 series based on Zen 3. Intel's upcoming 3rd Gen Xeon Scalable additions are a partial response, and have actually been shipping to customers for a couple of months, even though they have not officially launched.

Intel's Xeon Scalable processor based on Ice Lake-SP are built on a 10-nanometer-plus (10nm+) manufacturing node, and will fill the gap between now and when its 10nm SuperFin Sapphire Rapids Xeon stack launches later this year.
According to what Intel has already divulged, its upcoming Xeon chips touting Sunny Cove cores are optimized for high performance computing (HPC) and artificial intelligence (AI) workloads, with the company touting better performance per core (compared to Cooper Lake).
The Ice Lake-SP stack also supports eight-channel DDR4-3200 and faster I/O by way of PCIe Gen 4, and brings support for exascale storage with up to 6TB of memory per socket. And on the security side of the equation, Intel is thumping its chest over things like Total Memory Encryption (TME), Platform Firmware Resiliance (PFR), and new cryptographics accelerators.
"Protecting data is essential to extracting value from it, and with the capabilities in the upcoming 3rd Gen Xeon Scalable platform, we will help our customers solve their toughest data challenges while improving data confidentiality and integrity. This extends our long history of partnering across the ecosystem to drive security innovations," Lisa Spelman, Intel corporate vice president in the data platform group and general manager of the Xeon and memory group, said last November.
Leading up to the launch, Intel teased a pair of 32-core Ice Lake-SP Xeon CPUs crushing a pair of 64-core AMD EPYC 7742 processors. The caveat is that the benchmarks Intel highlighted leveraged AVX-512 instructions, which gives Intel a major advantage (incidentally, AMD is rumored to be adopting AVX3-512 and BFloat16 support with it eventual EPYC 7004 series). 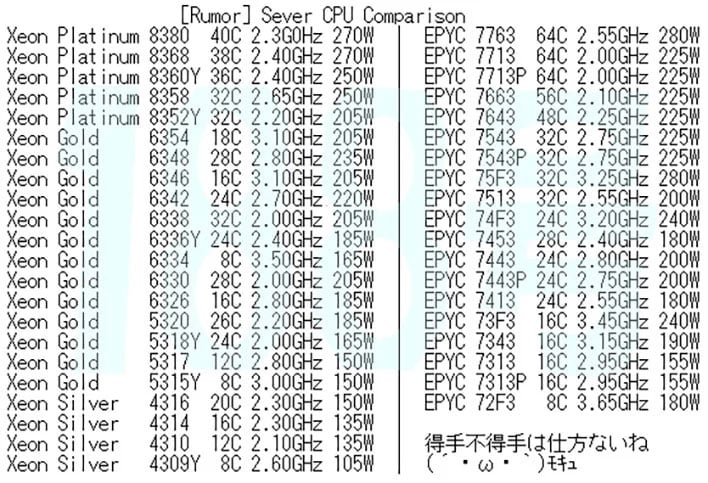 Intel could launch around two dozen Ice Lake-SP processors next month, if a recent leak ends up being true. These will span from 8 cores and 16 threads, on up to 40 cores and 80 threads, with varying base clockspeeds (2GHz to 3.1GHz) and TPD ratings (105W to 270W).
A couple of the higher end SKUs, both Platinum parts (Xeon Platinum 8325S and Xeon Platinum 8325Y), showed up in the SiSoftware SANDRA database earlier this month. While it's obviously problematic to evaluate performance based on leaked benchmarks of unreleased CPUs, the Platinum 8325S did score slightly higher than AMD's previous generation EPYC Rome processors based on Zen 2.
It will be interesting to see how the product stack shapes up, in terms of price and performance, and even more intriguing to find out how the upcoming lineup compares to AMD's latest server offerings.