Most people would probably agree that Intel is in need of a win in the CPU sector, now that AMD's Ryzen 5000 series is kicking tail and taking names (for those who can find one in stock, anyway). Ice Lake might provide that win, in the server space. How so? According to Intel, a 32-core Xeon processor based on Ice Lake can outperform a 64-core EPYC "Rome" processor in certain benchmarks.
There is a bit to unpack there, so let's get started. In present form, Ice Lake is what underpins Intel's 10th generation Core processors laptops, with Sunny Cove underneath the hood. It is based on a 10-nanometer manufacturing process, and more recently has been supplanted by Tiger Lake in the mobile space, powered by Willow Cove.
On the server side, however, Intel is getting ready to introduce its 3rd generation Xeon Scalable processor family, with one and two-socket offerings based on Ice Lake. Intel is promising "revolutionary new capabilities" with its Ice Lake-SP Xeon hardware, including security features such as Total Memory Encryption (TME) and Platform Firmware Resilience (PFR), and new cryptographic accelerators.
In fact, security is a major focus of Intel's upcoming chips, with Intel saying it is doubling down on its Security First pledge.
"Protecting data is essential to extracting value from it, and with the capabilities in the upcoming 3rd Gen Xeon Scalable platform, we will help our customers solve their toughest data challenges while improving data confidentiality and integrity. This extends our long history of partnering across the ecosystem to drive security innovations," said Lisa Spelman, Intel corporate vice president in the data platform group and general manager of the Xeon and memory group.
But what about performance? In a new video discussing its 3rd generation Xeon-SP chips and high performance computing (HPC), Intel made some interesting performance claims, in comparison to Rome. Take a look... 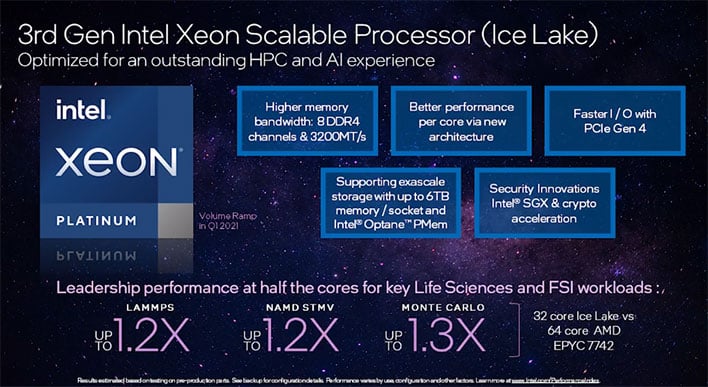 Presented at the Supercomputing 2020 (SC20) event, Intel sought to highlight how its next-gen Xeon processors will deliver increased performance for HPC workloads, by leveraging higher bandwidth, a new core architecture, and more cores with faster I/O. And interestingly, Intel claims its 32-core Ice Lake-SP Xeon chip is faster than a 64-core/128-thread EPYC 7742 processor.
The caveat, beyond not having tested this for ourselves, is that Intel is referring to specific benchmarks rather than across the board performance.

Also note (and this was confusing from Intel's wording) that Intel is comparing dual-socket setups. So we're actually looking at two unspecified Xeon processors with 32 cores each, which equates to 64 cores and 128 threads total, versus two EPYC 7742 processors with 64 cores each, equating to 128 cores and 256 threads. It still works out to half the cores and half the threads.
These benchmarks also leverage AVX-512 instructions, giving Intel a performance advantage. It is still impressive if the performance claims hold true, but when widening the field, you can expect an EPYC system with twice as many cores and threads to generally perform better. It's also worth mentioning that AMD is on the cusp of porting Zen 3 over to the server space with its upcoming EPYC "Milan" CPUs.
Nevertheless, Intel's chest thumping shows how important the data center is, as a segment. Server CPUs and platforms draw big money. And just the consumer desktop, things are getting awfully interesting in the server space.