Another batch of leaked benchmarks purporting to show a next-generation EPYC "Milan" server CPU based on Zen 3 has materialized, and if the data is to be believed, it offers a decent jump in IPC (instructions per clock) performance over the current generation "Rome" stack, based on Zen 2. Not that this should surprise anyone, given what we have already saw with AMD's Ryzen 5000 series.
In case you missed it, we have plenty of benchmarks and data in our review of the Ryzen 9 5950X and Ryzen 9 5900X, AMD's top two Zen 3 SKUs. As we found in our evaluation, these CPUs—and by extension, the Zen 3 architecture—are adept at pretty much everything, be it gaming, content creation, productivity tasks, or whatever else.
The next stop for Zen 3 is in the server category, and that is where the unreleased and unannounced EPYC Milan CPUs come into play. We have seen a bunch of leaks already, and the latest one consists of some interesting benchmark comparisons between an EPYC 7003 series CPU and an EPYC 7002 series chips, run (or obtained by) ExecutableFix on Twitter. 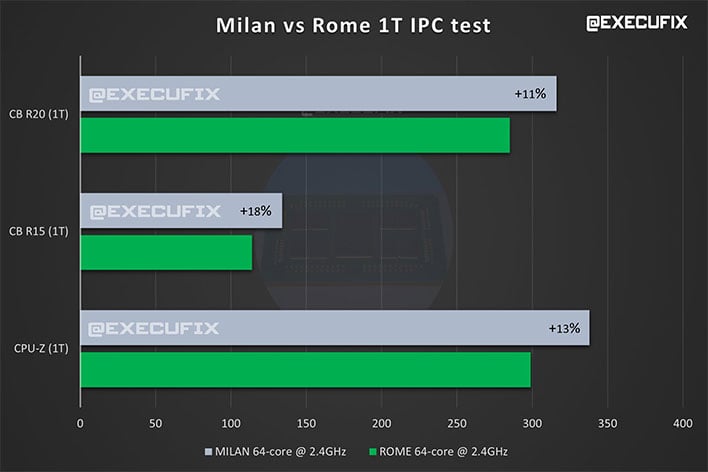 They compared unidentified 64-core models from both generations (next-gen and current-gen). Each chip was locked at 2.4GHz, and then used to run through a series of single-threaded workloads from Cinebench R15, Cinebench R20, and CPU-Z. Assuming the rest of the testbed is the same, this gives us a rough picture (potentially) of IPC performance.
In doing so, the Rome CPU sees between an 11-18 percent advantage, depending on the benchmark. The biggest gain came in Cinebench R15, and it is the one that is closest to AMD's claimed 19 percent IPC uplift in Zen 3 versus Zen 2. 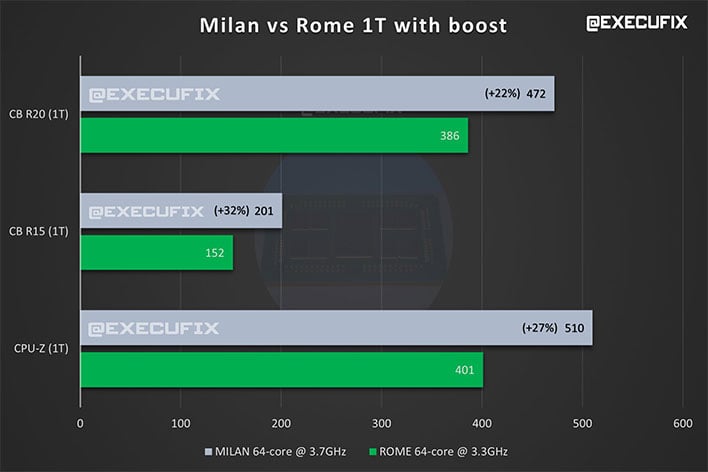 Things opened up a bit when unlocking the clocks. According to ExecutableFix, the mystery Milan CPU "can boost much higher," with an uplift of 400MHz versus the Rome part. This increased the single-threaded performance advantage to a high of 32 percent, and a low of 22 percent. That is no longer looking at IPC performance, because the clocks are different, but it gives an idea of what Milan will bring to the server space.
Multi-threaded performance looks very good as well... 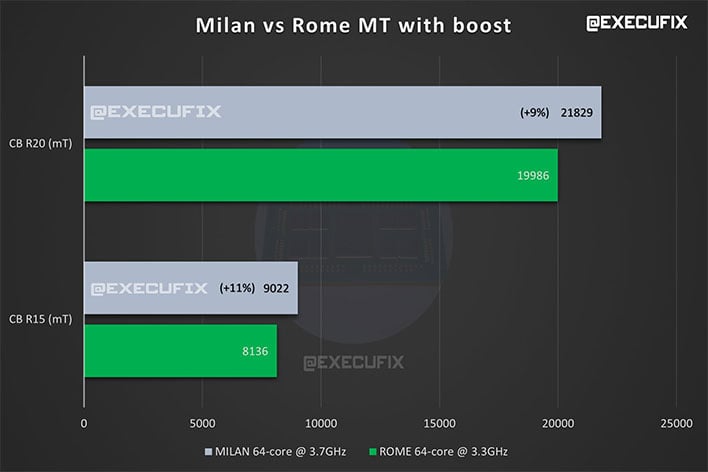 You might notice that CPU-Z is left out of the benchmark chart. ExecutableFix says this is because its multi-threaded benchmark is unable to properly utilize all 64 cores on the Milan chip, resulting in inconsistent performance.
In the Cinebench benchmarks, however, the 64-core Milan CPU at up to 3.7GHz performed between 9-11 percent than the 64-core Rome CPU clocked at up to 3.3GHz.
Summed up, Milan is looking like a decent successor to Rome. It will be interesting to see where pricing lands on AMD's next-gen server CPUs, and when they will materialize (expect an announcement before the end of the year).