As we come closer to Intel’s 12th generation Alder Lake-S processor launch, more information is making its way to the internet via leaks. Last week, we learned about the incoming “F” SKUs, which will have their onboard Xe GPUs disabled.

Today, at least for the European market, Alder Lake-S pricing leaked for Core i5, Core i7, and Core i9 SKUs. This pricing doesn’t officially come from Intel but instead from retailers. Still, it should give us a general idea of what to expect when Alder Lake-S desktop processors launch later this year. Momomo_us posted pricing from three different European retailers with and without VAT included. To make things easier, we averaged the prices of the three retailers to get a clearer picture of how things stand at this point.

We must remember that we can’t directly [and accurately] compare European pricing to what we’ll see here in the United States. Still, pricing is looking higher than the current 11th generation Rocket Lake-S family across the board. For example, the flagship Core i9-11900K has an MSRP of $609 but currently sells for $529.99 at Amazon. Likewise, the Ryzen 9 5950X is on sale for $749 versus an MSRP of $799. 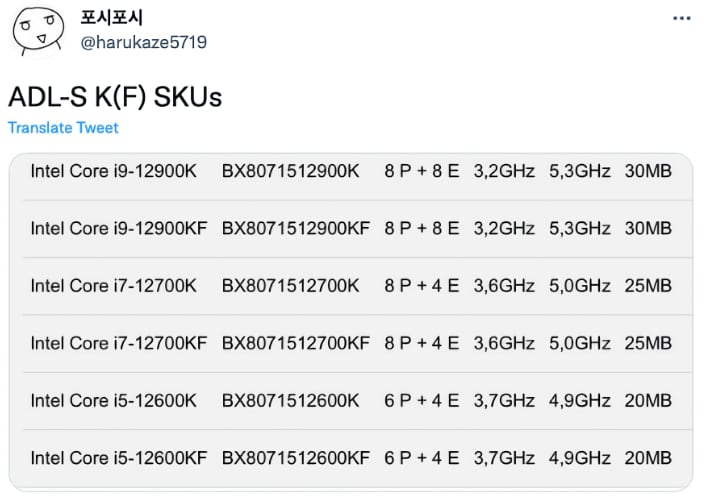 Intel’s Alder Lake-S family features a hybrid CPU layout, where Gracemont efficiency cores are paired with Golden Cove performance cores. Only the Golden Cove cores are HyperThreading enabled, which means that the Core i9-12900K, which is a 16-core processor, can execute only 24 threads.

The Alder Lake-S family of processors will team with new 600-Series motherboard chipsets. So far, we’ve seen references to Z690, H670, B660, and H610 chipsets. The 12th generation processors will use the new LGA-1700 socket and support both DDR4 and new DDR5 memory technology. Alder Lake platforms will also be the first to support PCIe 5.0 for consumer PC platforms.