It won't be long before Intel formally launches its upcoming Tiger Lake mobile CPUs. In the meantime, the company has been sharing more information about Tiger Lake, first during its Architecture Day 2020 event last week, and more recently at the Hot Chips symposium. One of the things to spill out of the latter is a shot of the die that underpins Tiger Lake.
The die shot depicts a quad-core Tiger Lake CPU, which as we know is being built on an enhanced 10-nanometer process (10nm++, if you will). Tiger Lake wields Intel's Willow Cove cores, which is the successor to Sunny Cove, the architecture that underpins Intel's current generation Ice Lake processors (built on a 10nm node).
Here is the look at the Tiger Lake die shot, as shared and annotated by Twitter user Locuza... 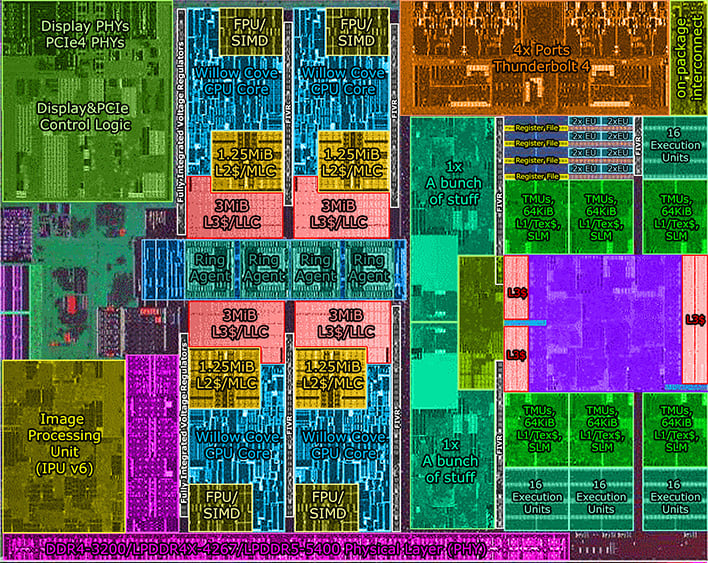 "Some quick annotations for the Tiger Lake die shot (Willow Cove CPU + Gen12/Xe LP graphics). It has several differences in comparison to Gen11 but on a high level Intel uses a similar floor plan," Locuza states.
Tiger Lake will be the first processor family to leverage Intel's 10nm SuperFin transistors. According to Intel, the optimizations its SuperFin technology brings to the table will provide "performance improvements comparable to a full-node transition." That is a lofty claim, and like everyone else, we are eager to see if it holds true.
The die shot above shows various I/O blocks, the cache arrangement, the integrated Gen12 graphics based on Intel's Xe architecture, four Willow Cove cores, Thunderbolt 4 ports, and a few other bits scattered about. 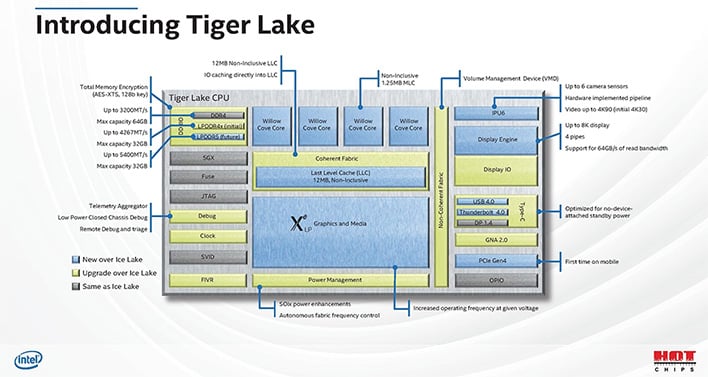 Here is another look at Tiger Lake, but this time labeled by Intel. This also depicts a 4-core version of Tiger Lake. We can see the beefier cache arrangement, with 12MB of L3 cache and 1.25MB of L2 cache. Intel also points to support for PCI Express 4.0. AMD won the race to PCIe 4.0 on the desktop front with its Ryzen 3000 series, but Intel will be the first to support the faster bus on mobile, with Tiger Lake.
Barring any change of plans, Tiger Lake will finally launch in just over a couple of weeks from now, on September 2, 2020.