This is a busy month for CPU launches. AMD is unveiling its 3rd Gen EPYC 7003 "Milan" server processors today (you can catch the livestream with us), and at the end of the month, Intel's 11th Gen Core "Rocket Lake-S" CPUs will be cleared for lift-off. As it pertains to the latter, some newly leaked benchmarks indicate Intel's next-gen desktop CPUs are in good shape.
Rocket Lake-S represents the final major iteration of Intel's 14-nanometer node. Be that as it may, Rocket Lake-S is a major architectural upgrade. It utilizes Intel's Cypress Cove cores, which is basically a 14nm back-port of Sunny Cove (10nm) used in the company's Ice Lake mobile processors.
Intel is claiming a 19 percent IPC (instructions per clock) performance uplift over Comet Lake-S. In addition, Rocket Lake-S will introduce some upgraded features, such as support for PCI Express 4.0 (something AMD adopted with Zen 2) and faster memory, among other things. DDR5, however, will have to wait until Alder Lake.
Also interesting is that Rocket Lake-S will be capped at 8 cores and 16 threads, whereas Comet Lake scales to 10 cores and 20 threads. Intel is confident the IPC bump will overshadow the fewer cores and threads at the top end of the stack.
As to what performance will look like, here are some leaked (and validated) CPU-Z benchmark runs... 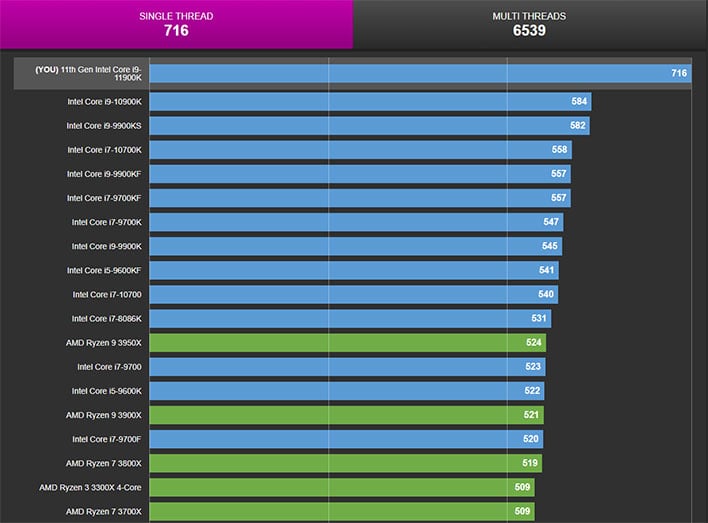 One of the benchmark entries highlights the upcoming Core i9-11900K. This is an 8-core/16-thread processor with a 3.5GHz base clock, 4.7GHz all-core turbo clock, and 5.3GHz single-core turbo clock (via Thermal Velocity Boost). It also features 16MB of L3 cache and a 125-watt TDP. All told, this looks to be a burly part.
In the CPU-Z benchmark run, it posted a single-core score of 716 and multi-core score of 6,539. The former is of more interest, as it gives us a rough idea of what kind of performance uplift we will really get with Rocket Lake-S (note that a single-threaded performance comparison is the not the same thing as an IPC uplift).
The single-threaded performance score represents a 22.6 percent bump over the Core i9-10900K, and a 37.4 percent jump over AMD's Ryzen 9 3900X. Those are impressive gains. Multi-core performance is looking strong as well, with the Core i9-11900K scoring 15.2 percent higher than a Ryzen 7 3800XT. 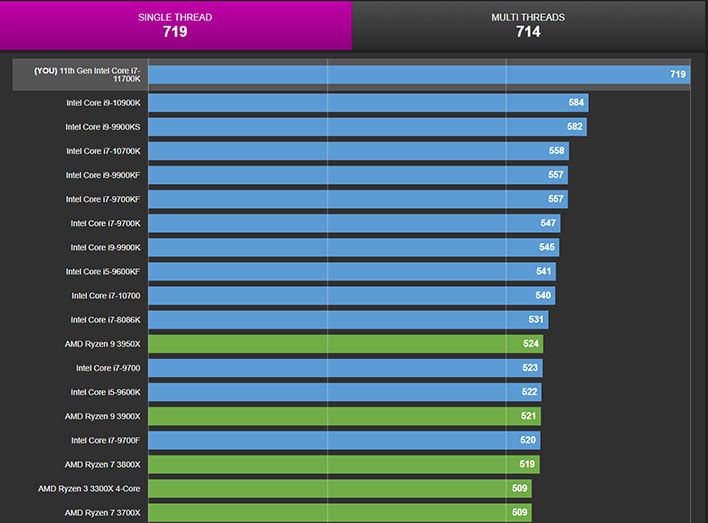 Incidentally, a separate CPU-Z benchmark entry for Intel's upcoming Core i7-11700K is slightly better on the single-core side. This is an also an 8-core/16-thread processor, but with a 3.4GHz base clock, 4.6GHz all-core turbo clock, and 5GHz single-core turbo clock.
The listing indicates it was overclocked to 5.9GHz, at which point it scored 719 in the single-core test. We would expect a bigger jump at that kind of OC in play over the stock-clocked Core i7-11700K, but it might not have been stable (the multi-core score was only 714, so something is clearly amiss).
Regardless, it looks like Rocket Lake-S will deliver a sizable performance increase over Comet Lake-S when it arrives later this month. Depending on how pricing and availability shake out, Rocket Lake-S could be a tempting platform to build around, if not wanting to wait for Alder Lake and Zen 4.