AMD today will formally extend its Zen 3 family over to its server line, with the launch of its EPYC 7003 "Milan" CPUs. The event will be livestreamed, allowing you to can tune in to watch it unfold. So brew yourself a cup of coffee (or grab your beverage of choice), sit back, and watch the unveiling live with us here at HotHardware.
The event starts at 11:00 am Eastern (8:00 am Pacific). Our best guess is it will last anywhere from around 30 minutes to an hour. Officially, the only real details AMD has provided is that its 3rd generation EPYC processors will indeed sport Zen 3 underneath the hood, and are "designed to elevate data center performance and bring transformational value to businesses."
You can catch the livestream right here...
AMD president and CEO Dr. Lisa Su will be present at the virtual event, as will Mark Papermaster, who serves as executive vice president of technology and engineering. Dan McNamara, senior vice president and general manager of AMD's server business unit, and Forrest Norrod, vice president and general manager for the data center and embedded solutions business group, will both be on hand as well.
While official details are rather thin leading up to the event, unofficially, AMD will be launching a whole bunch of EPYC 7003 series SKUs to compete with Intel's own expanding Xeon processor lineup. AMD's 3rd Gen EPYC lineup will span 8-core/16-thread options on up to 64-core/128-thread processors, culminating in the EPYC 7763.
Here's a look at the leaked lineup... 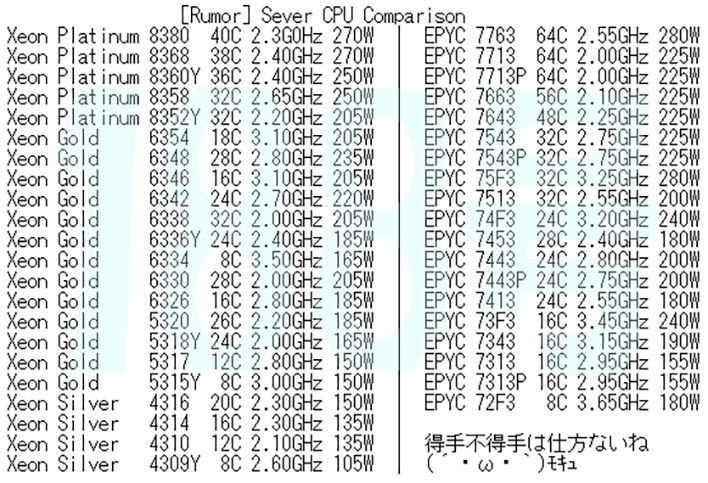 Sitting in between the top and bottom options are several 16-core/32-thread, 24-core/48-thread, 48-core/96-thread, and 56-core/112-thread options. Clockspeeds and TDP vary by model, though of course we'll have to wait for AMD's actual unveiling to know for sure what the specifications (and SKUs) actually end up being.
The big deal for server clients is the move to Zen 3. This brings with it a double-digit IPC (instructions per clock) performance uplift compared to Zen 2. Incidentally, Dr. Su touted a 32-core/64-thread EPYC 7003 series CPU putting the beat down on a 28-core/56-thread Intel Gold 6258R 2P system in a weather forecasting simulation.
It's going to be interesting to see how pricing and performance shake out, compared to what Intel will offer when Ice Lake-SP arrives. Regardless, server customers are going to have a lot of options based on the latest-generation architectures from both companies.