Although Intel’s 7nm processor delay is definitely disappointing news, that isn’t slowing down the company’s near-term products like its 11th generation Tiger Lake and Rocket Lake-S families. The former is expected to be announced at a big virtual event on September 2nd, and will form the basis of a new generation of mainstream laptops.

Rocket Lake-S, however, is a bit murkier when it comes to an exact launch timetable, but we’ve been seeing more signs that Intel is wrapping up development work on the processors. The most recent evidence of this comes from a new Rocket Lake-S engineering sample that found its way onto Geekbench.

What we see is an 8-core/16-thread processor with a base clock of 3.4GHz and a maximum turbo clock of 5GHz. That puts the clocks of this particular high-end Rocket Lake-S SKU in the same ballpark as flagship 10th generation Comet Lake-S SKUs. However, what will make this generation so interesting (from a performance perspective) is that Rocket Lake-S will share the same Willow Cove CPU cores as 10nm Tiger Lake. 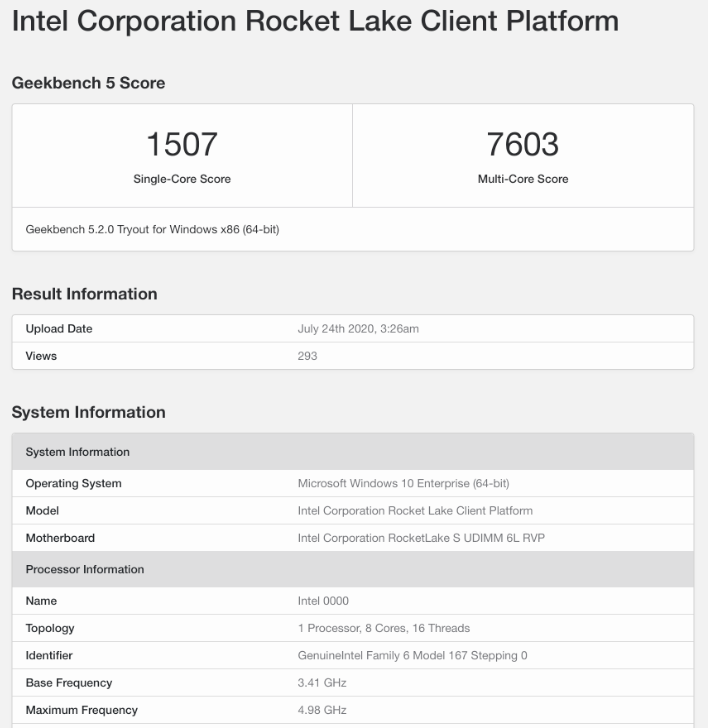 Even though Rocket Lake-S is still on the 14nm process node, the use of Willow Cove CPU cores is expected to bring significant architectural improvements and a big lift in IPC. The fact that Intel is able to maintain the high clock speeds that we saw with Comet Lake-S means that the generational leap in performance could be huge. However, the 14nm process node also means that we likely won’t see any power efficiency gains that would come from moving to a smaller 10nm node.

With that being said, Rocket Lake-S will finally bring PCIe 4.0 support to Intel desktop processors (something that AMD introduced with Ryzen 3000 a year ago), Thunderbolt 4, and the brand new 12th generation Xe graphics architecture.

One of the wilder rumors that we’ve heard about Rocket Lake-S in the past few weeks is that Intel is working on a vPro SKU with a puzzling 8-core/12-thread configuration. Chances are that the rumor is inaccurate at best, but it would be a rather interesting design choice for an Intel processors.