A newly leaked slide suggests Intel may adopt a design strategy similar to ARM's big.LITTLE approach with a segment of its upcoming Rocket Lake processors, and specifically at least one of its Rocket Lake-S vPro CPUs. Or it could be a typo (assuming the slide is real to begin with), though this is the not first rumor to attach Intel to a big.LITTLE design scheme.
Last month, Intel uploaded some interesting documents to its technical library in reference to Alder Lake, which will come after Rocket Lake and power Intel's eventual 12th generation Core processor stack (presumably, anyway). Those documents pointed to a new socket, LGA 1700, which does not come as a surprise.
However, the same leaker who took a screenshot of the documents had also previously obtained a slide claiming Alder Lake will arrive with up to 16 cores arranged in big/little format similar (though not identical) to ARM's big.LITTLE layout. The slide indicated that at least two Alder Lake processors would feature 8 big cores and 8 little cores, plus onboard graphics (for an 8+8+1 configuration).
Fast forward to today and the folks at Videocardz posted a photo of a slide it obtained from a "reliable source." The picture shows three Rocket Lake-S vPro processors, one of which sports an uneven core/thread arrangement. Have a look... 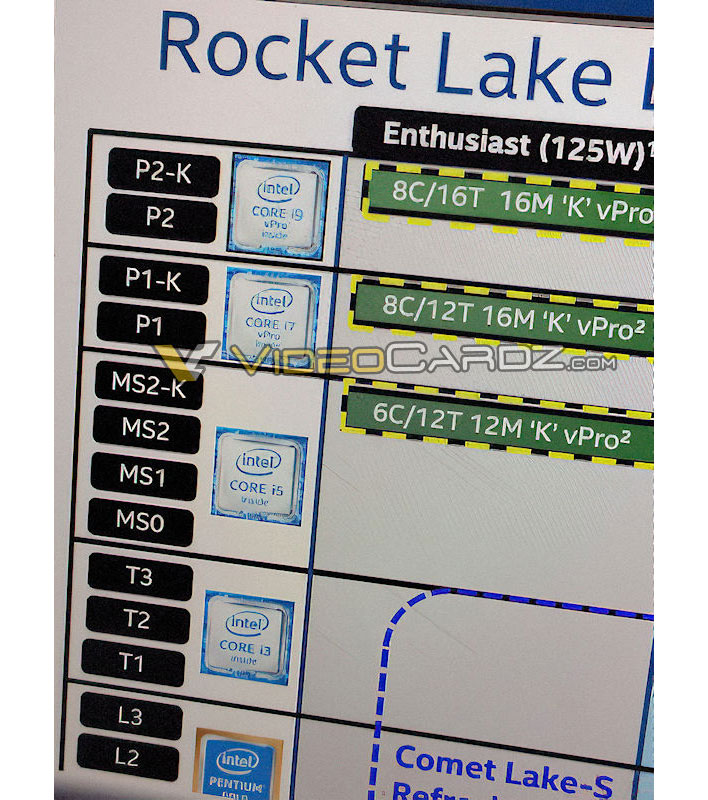 The top part is a Core i9 chip listed as having 8 cores and 16 threads while the bottom SKU shows a Core i5 CPU with 6 cores and 12 threads. Nothing unusual with either of those. However, sandwiched in between those two models is a Core i7 part listed as having 8 cores and 12  threads. Is that a typo or actually representative of the core and thread counts?
Whoever provided the picture was not able to say, though the unusual core and thread configuration is the reason why they shared the photo.
Presuming this is both real and an accurate reflection of Intel's upcoming CPUs (none of which we can say with any level of certainty), bear in mind that it's a limited snapshot of the vPro series. Who knows if the regular (read: non-vPro) versions of Rocket Lake-S would follow the same design scheme.
Another possibility here is that Intel is disabling Hyper Threading on some of the cores, rather than adopting a big/little design. If we had to guess, though, we'd say it's likely a mistake.