Intel is taking the fight to AMD with a bevy of new mobile and desktops CPUs, some of which it announced at CES 2021. During the event Intel also previewed one of its upcoming Rocket Lake-S processors, the 11th Gen Core i9-11900K, with 8 cores and 16 threads clocked at up to 5.3GHz. As we wait for it and other Rocket Lake-S CPUs to release to retail, pricing details have been leaked by a Belgian retailer.
In case you missed our coverage, Intel doubled down on saying Rocket Lake-S will deliver a double-digit percentage gain in IPC (instructions per clock) performance over Comet Lake-S. Specifically, the CPU maker is promising a 19 percent jump in IPC performance, over the previous generation. That is certainly enticing, if real world results match Intel's claims.

Rocket Lake-S will top out at 8 cores and 16 threads, rather than scaling to 10 cores and 20 threads like Comet Lake-S. The Core i9-11900K figures to be the headline act among the bunch, and if the leaked pricing information is correct, it could actually end up being cheaper than the chip it is replacing, Intel's Core i9-10900K.

Here's a look at some of the pricing information... 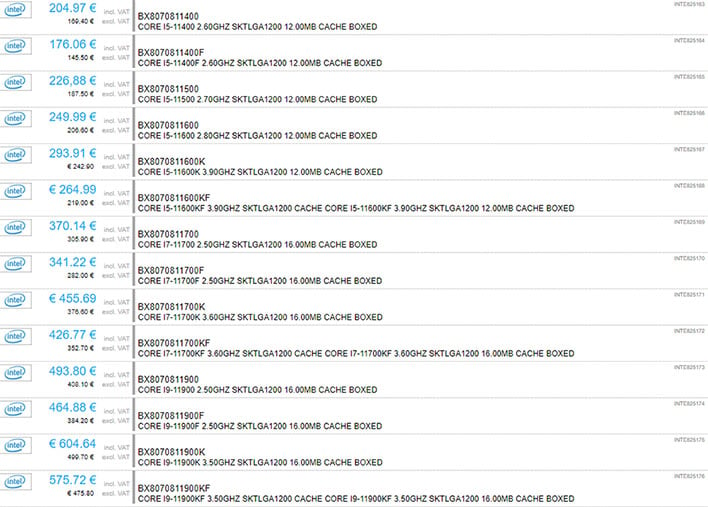 
There are over two dozen Rocket Lake-S processors listed, ranging in price from €145.50 (Core i5-11400T) to €499.70 (Core i9-11900K), excluding VAT. Converted to US currency, pricing ranges from $175.76 to $603.61. There are some caveats, though.
For one, this is leaked data, and not official MSRPs, based on whatever early information the retailer has access to at the moment. Secondly, pricing between territories rarely follows a straight currency conversion. And lastly, pricing on some models varies, depending on whether opting for the "K" or "KF" designation, where available.
In case anyone is confused, the "K" designation denotes an unlocked multiplier, while the "F" designation means it lacks integrated graphics. So CPUs with the "KF" suffix such as the Core i9-11900KF have an unlocked multiplier but no onboard Xe graphics, hence it is a little bit cheaper than the the Core i9-11900K (

€475.50 [$574.38 in US currency) versus €499.70 [$603.61 in US currency]).
On a related note, the retailer shows the 8-core/16-thread Core i9-11900K selling for less than the 10-core/20-thread Core i9-10900K, which is listed at €549 ($663.15 in US currency). If that ends up being the case, then it seems Intel is taking into consideration the downgrade in core and thread counts, even with a 19 percent IPC bump in play.
Going down the list, pricing for Rocket Lake-S variants are a little bit higher than the Comet Lake-S CPUs they replace, where the core and thread counts are the same.
In any event, don't take any of this pricing data as being written in stone. It's expected that Intel will release its Rocket Lake-S stack in March, and even if the leaked pricing information is accurate, things could change in a couple of months.