Back in September, hot off of launching its first ever gaming monitors, HyperX unveiled the Cloud Stinger 2. It brings a sleeker look and refined 50mm drivers to the company’s budget gaming headset. After revealing this updated offering, HyperX evidently wasted no time enhancing the headset even further, as the company is now back, just over two months later, with a wireless version of the Cloud Stinger 2.

Thanks to a rechargeable lithium-polymer battery and a 2.4GHz USB 2.0 wireless receiver, gamers can now opt to ditch the wires when they buy the Cloud Stinger 2. According to HyperX, the battery should last for twenty hours with the headset operating at 50% volume before needing a recharge. Twenty hours of use should be plenty for multiple work days and all but the most extreme gaming sessions. 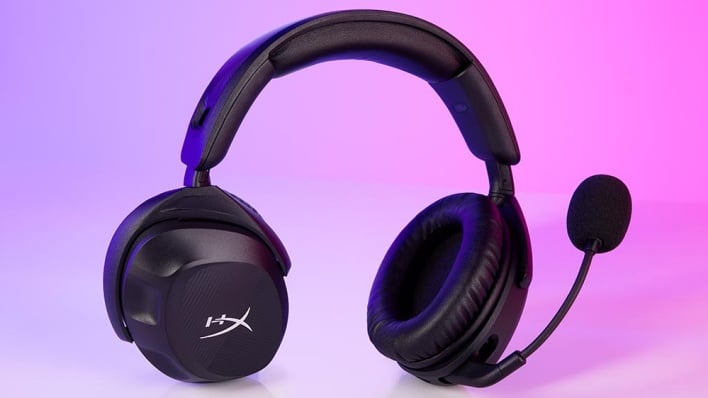 Beyond wireless functionality, the Cloud Stinger 2 Wireless should provide buyers with the same comfortable wearing experience as the wired version, thanks to the upper padding and earcups composed of memory foam wrapped in premium leatherette. Like the earcups on original Cloud Stinger, which launched in 2016, the earcups on the updated headset can rotate 90 degrees, which is a comfort-enhancing feature we missed when reviewing the otherwise excellent HyperX Cloud Alpha Wireless. Potential buyers should also be happy to know that cutting the cord and adding a battery nets the Cloud Stinger 2 Wireless only three grams of weight over the wired version, making for a total of 275 grams or 0.61 pounds.

That said, according to the spec sheet included in the press release, the 50mm drivers in the wireless headset have a somewhat narrower frequency response range (10Hz – 20.2kHz) than the 50mm drivers in the wired headset (10Hz – 28Hz). This difference aside, the wireless and wired versions share the remaining features on the list: onboard audio controls, virtual 7.1 surround sound, DTS Headphone:X Spatial Audio, a bi-directional, noise-cancelling, and non-detachable microphone, and a swivel-to-mute feature.

The HyperX Cloud Stinger 2 Wireless is available starting today at a MSRP of $99.99. Potential buyers will have to decide whether they want to let go of an additional $50 to buy the wireless edition over the wired addition, which retails at $49.99. A doubling of the cost is quite the price hike for the addition of wireless functionality, but the $99.99 price tag means buyers can get into the wireless headset game while paying half the cost of HyperX’s premium wireless headset, the Cloud Alpha Wireless.