It's going on four years since the last time I spent hands-on time with Huawei's sleek and capable MateBook X Pro, and who knows if I ever will again—Huawei's relationship with the US has only grown more tenuous since then. That's too bad because the upgraded 2022 MateBook X Pro model unveiled at Mobile World Congress looks like another promising laptop probably isn't bound for the US.
From what I can tell in the press images, the design language is mostly the same, that being a MacBook Air-like aesthetic. The MateBook X Pro remains an exceptionally thin and light laptop measuring 12.2 x 8.7 x 0.61 inches and weighing right around 3 pounds. It's sculpted from what Huawei describes as "full CNC technology for over 18,000 seconds on every device." 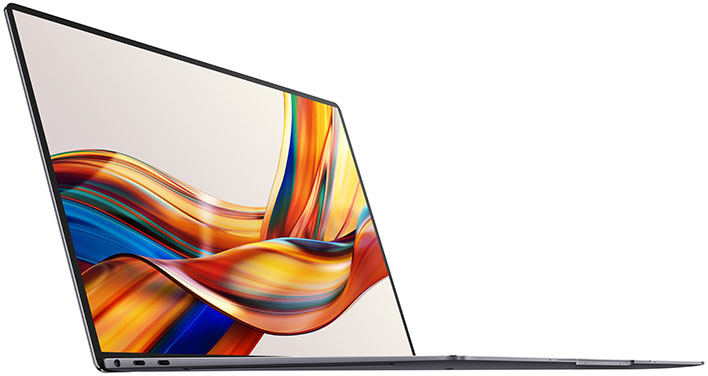 Huawei also says it equipped the 2022 MateBook X Pro with the "finest display" it has ever used, that being a 14.2-inch OLED touchscreen with a 3120x2080 resolution (264 ppi), 90Hz refresh rate, 500 nits max brightness, and a 1,500:1 contrast ratio. The company is also pitching the MateBook Pro X as the "world's first TÜV Rheinland Pro-level color accuracy with dual color gamuts certification laptop."
Incidentally, Huawei is sticking with Intel's previous generation Core i7-1195G7 based on Tiger Lake rather than injecting its flagship laptop with Alder Lake-U or Alder Lake-P (a 12th gen refresh is apparently scheduled for later this year). That's a 4-core/8-thread chip with a 5GHz max turbo frequency, 12MB of L3 cache, and integrated Iris Xe graphics.

This is paired with 16GB of LPDDR4x RAM and a 1TB NVMe solid state drive. So not exactly cutting edge in light of the latest silicon from Intel and AMD, but it should be a capable performer. Huawei's also flexing an upgraded cooling scheme with dual Shark Fin fans and a new ultra-thin vapor chamber system.
Perhaps most intriguing, though, is a six-speaker sound system. Laptop audio typically ranges from tinny and disappointing to acceptably decent, and rarely rises above that latter threshold. I don't know if this one does either, but if not, it won't be for lack of speakers.
As part of the audio system, Huawei says the MateBook X Pro leverages a split-frequency setup with back-to-back speakers for the woofer.
"Combined, the sound system is capable of driving immersive lows and clean highs to further elevate the listening experience. The sound system works in harmony with Huawei’s sound reconstruction algorithms to widen the soundstage of the 3D surround sound, adding depth to the experience while improving sound imaging," Huawei says.
It's also equipped with four microphones positioned along the edge for 360-degree sound pickup within a 5-meter radius, bolstered with AI noise cancellation algorithms. As for connectivity, you're looking at Wi-Fi 6 (802.11ax), Bluetooth 5.1, four USB-C ports (all support data, charging, and DisplayPort duties), and a 3.5mm headphone/microphone combo jack.
The retooled MateBook X Pro will start at €1899 in Europe, which is around $2,130 in US currency.