In the land of laptops, NVIDIA's GeForce RTX 3080 ranks as its flagship mobile GPU, but perhaps not for long. There appears to be a GeForce RTX 3080 Ti on the horizon. As we wait, it is making the unofficial benchmark rounds on Geekbench, as part of a new HP Omen laptop configuration with an Alder Lake CPU onboard as well.
Before we get to the leak, let's take a high-level overview of NVIDIA's current mobile Ampere stack...

The GeForce RTX 3080 in mobile form can be kitted with 8GB or 16GB of GDDR6 memory. OEMs have the green light to adjust the power envelope from 80W on the lower end, on up to 150W or even a bit higher with Dynamic Boost in play. As such, the boost clock can range from 1,245MHz to 1,710MHz. Regardless, all variants sport 6,144 CUDA cores and a 256-bit memory bus.
NVIDIA's GeForce RTX 3080 Ti could potentially deliver a sizable performance jump, though it too will depend on how it's configured, and which version of the GeForce RTX 3080 it gets compared against. That said, here's what we're looking at in a pair of Geekbench listings... 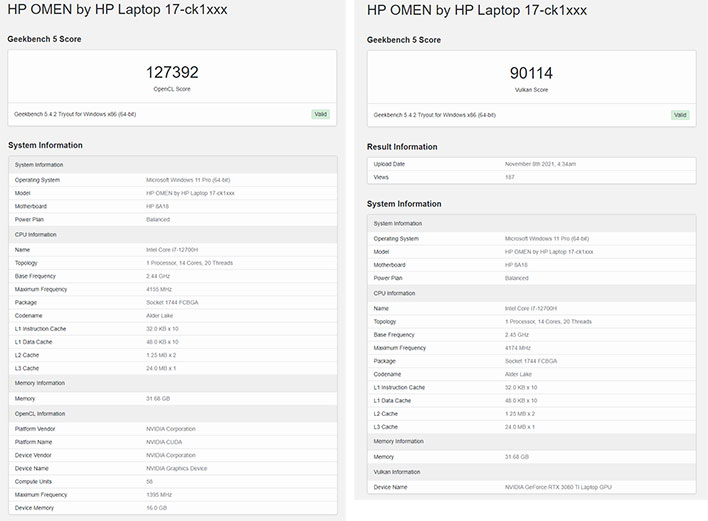 One of listings clearly identifies the graphics chip as a GeForce RTX 3080 Ti Laptop GPU, while the other benchmark run from the same setup reveals some basic specifications. According to the benchmark leak, NVIDIA's upcoming GeForce RTX 3080 Ti mobile sports 58 compute units, 16GB of memory (presumably GDDR6), and a 1,395MHz GPU clock (in this instance).
That equates to 7,424 CUDA cores (58 compute units multiplied by 128 streaming multiprocessors), or a nearly 21 percent increase over the GeForce RTX 3080 (6,144 CUDA cores). As configured in this laptop, it scored 127,392 in the OpenCL test and 90,114 in the Vulkan test.
Both scores are actually slightly below the average that Geekbench has recorded for the mobile GeForce RTX 3080. It averages 128,854 in the OpenCL test and 91,130 in the Vulkan test. There are various reasons that could explain this, from running the unreleased part at a lower power setting and with slower clocks, to the lack of driver optimizations. So we're not really concerned with the actual benchmark data, and are more intrigued with the listings pointing to a new flagship mobile GPU.
Meanwhile, the HP Omen is also rocking an Intel Core i7-12700H processor, which is another unreleased and unannounced part. Intel did roll out its initial Alder Lake offerings on the desktop, but has not said a whole lot what's in store for laptops. We know that mobile Alder Lake CPUs are coming, though, it's just a matter of when.