HP seems to have tipped AMD's hand, in regards to a new processor launch that is perhaps coming sooner than later. That would be the Ryzen 7000 series, assuming a new listing on HP's website is accurate. The listing is for a pair of all-in-one desktops: 24-inch and 27-inch models in Starry White and Starry Forest, but it is not the choice of colors that is interesting here.
What's eye-catching are the processor options. According to the listing, the upcoming all-in-one desktops can be kitted out with up to a 12th Gen Intel Core i7 processors, which is Alder Lake, or up to an AMD Ryzen 7000 series processor. Here's a look at the listing... 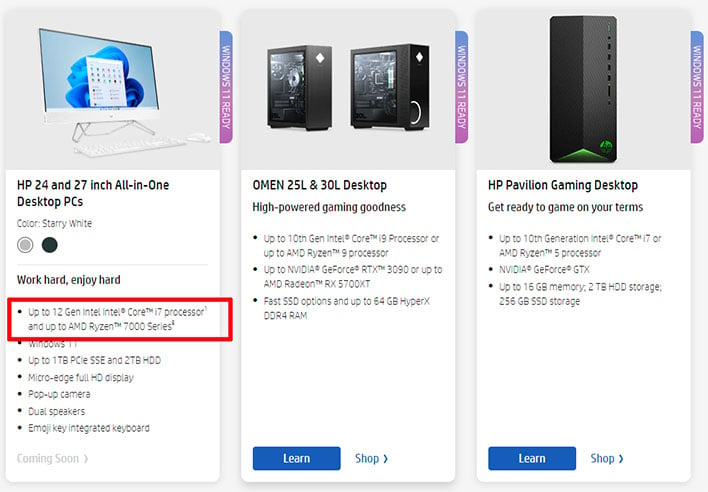 There are a few different possibilities that come to mind. One is that this is a typo, plain and simple. However, it's not like HP hasn't advertised unreleased hardware in the past. Through one means or another, HP has been the source of some interesting hardware leaks, like the GeForce RTX 3080 Ti.
Rather than ponder if this is a typo or not, probably the better question to ask is what does the Ryzen 7000 series represent? Let's get the less likely answer out of the way: Zen 4. We suppose there is an outside chance (far outside) that his all-in-one could be offered with Zen 4, but probably not—Zen 4 is just too far in the distance right now.
So if it is not Zen 4, what is it? Probably AMD's next-generation APU lineup, codenamed Rembrandt. According to past leaks, Rembrandt will be based on AMD's upcoming Zen 3+ refresh. It is not an entirely new architecture, but an enhancement of Zen 3, with a shift to a 6-nanometer manufacturing process (versus 7nm for Zen 3), and stacked 3D V-cache. 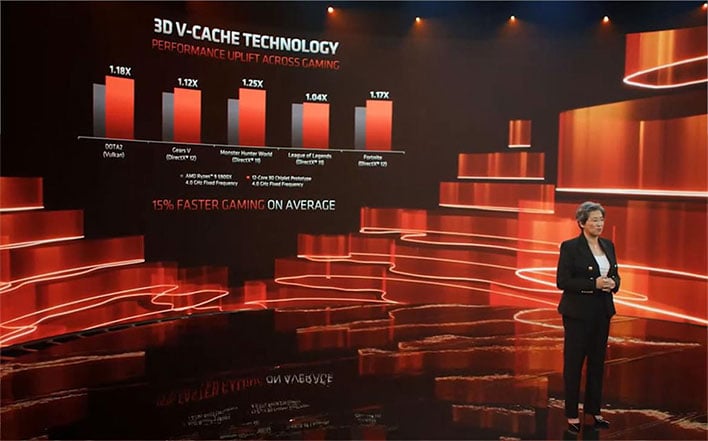 AMD has already confirmed that it intends on launching chips with stacked 3D V-cache by the end of the year, claiming it will deliver a 15 percent gain in gaming. And that's what we're looking here, in addition to onboard RDNA 2 graphics. Rembrandt is also said to feature support for DDR5 memory.
The other possibility is that this listing is both a typo and indicative of Rembrandt. It just depends on whether AMD is really skipping over the Ryzen 6000 series, and what it plans on calling its eventual Zen 4 processors.
A lot of unknowns right now. Be that as it may, this looks like an interesting all-in-one lineup. In addition to featuring a choice between Alder Lake and the Ryzen 7000 series, it can configured with up to 1TB of SSD storage and 2TB of HDD storage, a Full HD display, dual speakers, and Windows 11. We'd venture a guess it will also be offered with up to 64GB of DDR5 memory as well.