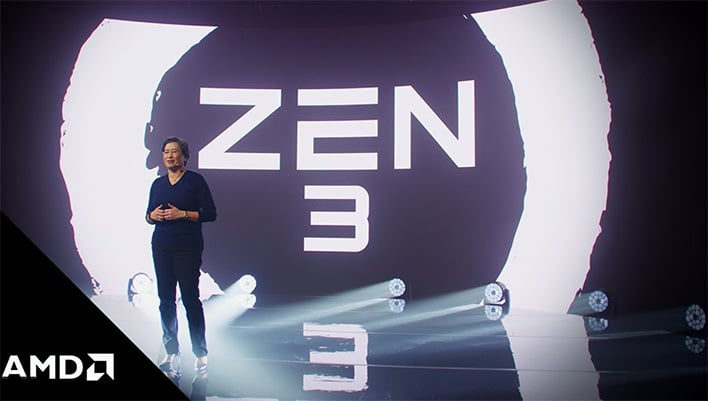 After all the waiting, all the leaks, all the rumors, and everything else, the big day is finally here. As we have been looking forward to for a long while now, AMD today will unveil its Zen 3 lineup for the desktop, under what we presume will be the Ryzen 5000 banner (otherwise known as Vermeer). And you can watch it live as it unfolds.
AMD CEO Dr. Lisa Su said "it's been so much fun getting ready" for the big event and that she is "looking forward to sharing what's next" for the Ryzen family. So are we. Unofficially, AMD's next-gen CPUs are expected to deliver faster clockspeeds and potentially a healthy bump in IPC (instructions per clock) performance, among other things.

As we typically do for these sort of things, we invite you to stay right here to watch the event, in the embedded livestream below...

Nuke a bag of popcorn, grab a beverage, and see what is on tap from AMD. The event is scheduled to begin at 12:00 pm Eastern (9:00 am Pacific / 11:00 am Central / 5:00 pm in the UK). It will probably last around an hour, give or take, though that is just a guesstimate.
This figures to be an interesting launch for AMD. It's Zen 3 architecture represents the end of the road for socket AM4, with several existing chipsets confirmed to support the Ryzen 5000 series (by way of a BIOS update, of course). There has even been a rumor that AMD will not release a new chipset for Zen 3, though that remains to be seen.
As to the Ryzen 5000 branding, the chatter is that AMD is skipping Ryzen 4000 on the desktop to align the nomenclature with its mobile parts. From the beginning, AMD's mobile CPUs and APUs have adopted a higher series number than their desktop counterparts, based on the underlying architecture. Have a look...
If things play out the way we expect they will, AMD's desktop, mobile, and APU chips based on Zen 3 will all be branded as Ryzen 5000 series parts, which makes more sense.
Finally, while today is Zen 3's official launch, retail availability will almost definitely be a little bit later. Rumor has it that the Ryzen 9 5900X (12-core/24-thread) and Ryzen 7 5800X (8-core/16-thread) will be available to purchase starting October 20, though that has not been confirmed.