Halloween is now upon us as the spooky season comes to an end. To get into the spirit before October 31st, you will not need an Ouija board, just an AR capable device to summon ghosts and skeletons wherever you please. NASA has also joined the festivities by releasing a new sun image that looks suspiciously like a jack-o-lantern.

Google is bringing spookiness to life with its new augmented reality features in Google Search. Using Google Search in app or browser on Android or iOS, users can use keywords in search such as “Halloween” or “Skeleton” to summon 3D augmented reality models of a ghost or skeleton. They will not always show up and are not in once place, so you randomly stumble upon them. Once you find and place one, though, you can move the model closer or further away while Halloween-themed music plays in the background for some spooky ambiance. Besides the AR ghost and skeleton, there is also a set of three jack-o-lanterns, a hot dog dog (dog in a hot dog costume), a pirate dog, and a magic cat. Google has also introduced two new doorbell sounds for Nest Devices, a “Black Cat” and “Werewolf” tone. The sounds introduced last Halloween are still around, too, so you can use those as well. 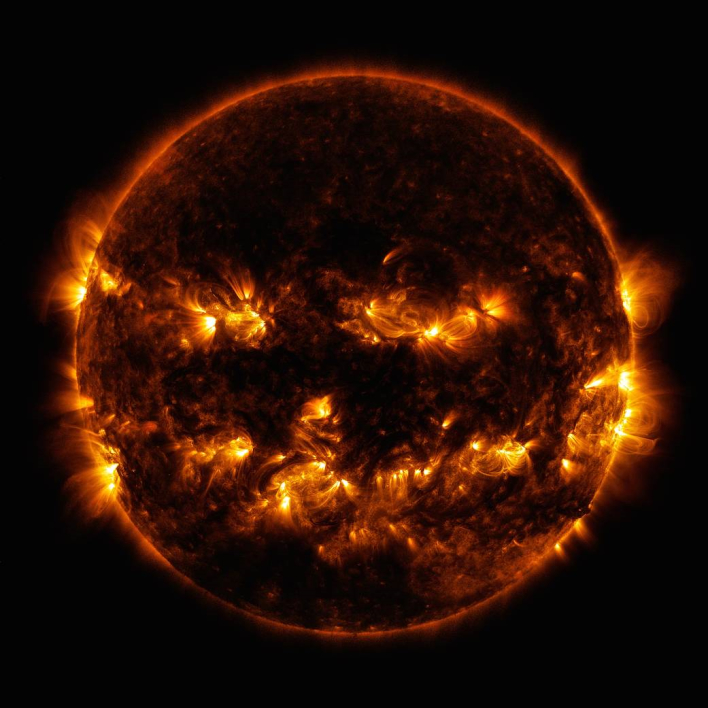 Besides the new spooky Google features, NASA has also joined in on the fun. People say do not stare at the sun, but NASA did just that and captured some interesting photos. One of which ended up looking like a jack-o-lantern’s face, which you can see above. NASA reports that “The active regions appear brighter because those are areas that emit more light and energy.” The photo was made using a blend of light wavelengths and colorized in the typical gold and yellow, making it look particularly Halloween-like. This is a pretty impressive coincidence, and it is just interesting to see a photo of the sun like this.

As we are only a day away from Halloween, feel free to tweet @HotHardware with your spooky AR images or anything you want to share. If you have some cool technology related costumes or anything fun, we’d love to see it too. If you want, you can also share any fun Halloween plans in the comments below. Are you ready to get your “boo” on?