Halo Infinite Has A Native 32:9 Super Ultrawide Display Mode For PC And It Looks Amazing

Let's say you splurged on a ginormous 49-inch monitor like AOC's fast and wide Agon AG493UCX, which offers a 5120x1440 resolution and 32:9 aspect ratio. Well, guess what? Microsoft revealed that Halo Infinite will natively support such ultrawide displays when the game launches this year, and it teased a few amazing looking screenshots.
In the image above, for example, you can see what one of the scenes looks like on a 32:9 display compared to a 21:9 monitor, and if you click to enlarge it, there's also a 16:9 comparison. It is super expansive, and is part of an effort to build a "native, first-class PC experience" so players who game on PC do not feel like an afterthought to their console brethren.
"Building a native, first-class PC experience for Infinite meant convincing some brilliant console developers that these quirky features they’ve never cared about are hugely important to PC players. This job is at times equal parts educator and PC hype man. As an example, I might need to convince someone that even though 21:9 ultrawide doesn’t exist on console, it’s a very important thing to PC players and we should design our content natively for it," Halo Infinite producer Jeff Guy said.
That's a boon for gamers who jumped on board the ultrawide train and bought a monitor like Samsung's bodacious Odyssey G9. Monitors like the G9 can also function as a dual display setup by splitting the screen (play games on one side, have your chat program of choice on the other)—it's like having a pair of 27-inch monitors, but without the gap and bezels in between them. 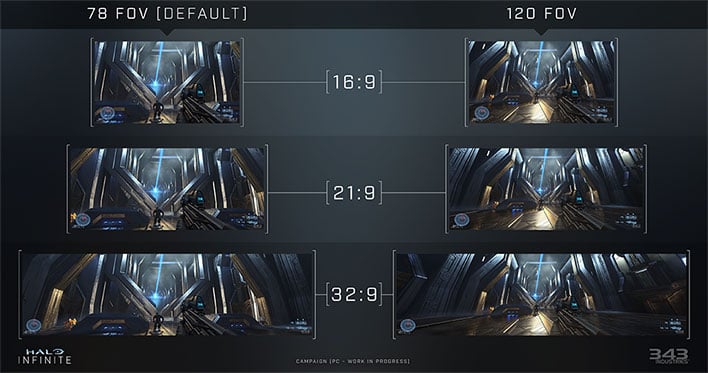 In addition to native support for 21:9 and 32:9 aspect ratios (and beyond), both PC and console players will be able to adjust things like field of view (FOV), which can go up to 120 degrees.  The promise is that Halo Infinite is going to look fantastic on pretty much any display at any resolution and aspect ratio, both during gameplay and in cut-scenes.

"There are sandbox animations for the first-person perspective we want to ensure look good at any aspect ratio, you don’t want pieces of your armor popping into view unexpectedly, you want weapon and equipment animations to look great. There’s the new Tacmap that has to look and navigate according to the variably sized screen," added Mike Romero, development lead for Halo Infinite. 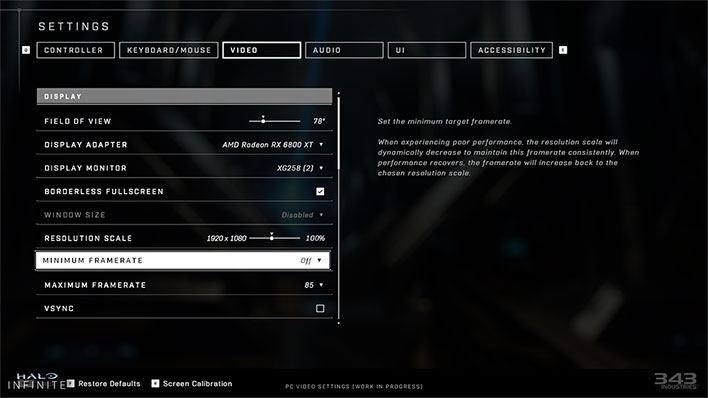 Mouse and keyboard support will apply to both platforms, with triple keyboard and mouse bindings, though PC gamers will have access to a host of goodies—things like minimum and maximum framerate settings, an overlay to frames per second and ping, a borderless fullscreen option, and more.
The Halo Infinite team also revealed that players will be able to host a local multiplayer server on their PC. Other players on their LAN can join who are playing on PC and Xbox can join.
It certainly sounds like Halo Infinite will be the worth wait. It was initially hoped the game would launch alongside the Xbox Series X, but it was delayed until this year, with its release now set for sometime in the third or fourth quarter.