With the NVIDIA GeForce RTX 30 Series and AMD Radeon RX 6800 Series roaming the streets these days (that's if you can find one), some gamers are probably looking for a monitor upgrade as well to complement their system. Luckily, the folks at AOC are happy to oblige with the release of their new Agon AG493UCX gaming monitor, which looks amazing.

The Agon AG493UCX is a massive 49-inch, ultra-wide curved monitor with an aspect ratio of 32:9. That works out to a DQHD resolution of 5120x1440. According to AOC, this is like giving you two 27-inch QHD monitors in one, side-by-side. Since it's aimed at gamers, AOC has spec'd the monitor with a refresh rate of 120Hz, while GtG and MPRT response times are listed at 5ms and 1ms respectively. This is also an AMD FreeSync Premium Pro Certified monitor with a sync range of 48Hz to 144Hz. 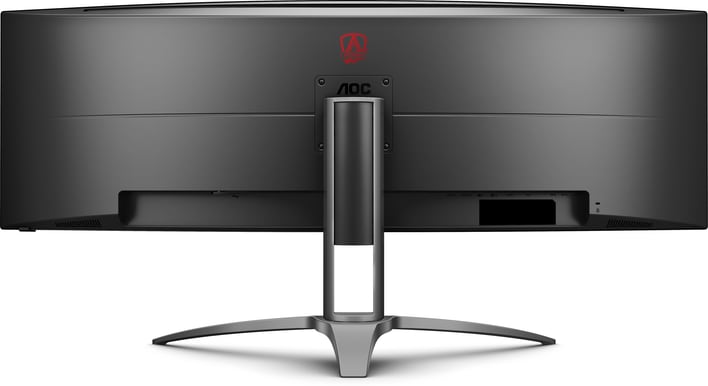 This is a VESA Certified DisplayHDR 400 panel, and typical brightness is rated at 550 cd/m2. Other features include 178-degree vertical and horizontal viewing angles, and a 1.8-meter radius curvature. AOC also claims 121 percent of the sRGB, 90 percent of DCI-P3, and 90 percent of AdobeRGB color spaces for those that were wondering.

The Agon AG493UCX also includes a built-in KVM switch the allows the monitor to share a single mouse and keyboard between multiple computers. As for connectivity options, you won't be left wanting. You'll find two HDMI 2.0. ports, two DisplayPort 1.4 ports, and a USB-C port (DP Alt Mode supported). And although we doubt you'll actually use them, the monitor has two 5W speakers built in as well.

According to AOC, the Agon AG493UCX will launch this month across Europe, with a price tag of £899 in the United Kingdom. At this point, pricing and availability in the United States is unknown.