Developer 343 Industries is acutely aware of the criticisms surrounding the recent gameplay reveal of Halo: Infinite, a highly touted launch title for Microsoft's upcoming Xbox Series X console. It would be impossible not to be aware—even Domino's Pizza took the opportunity to poke fun at the situation (and promote its pizza in the process) on Twitter. So, what does it have to say about it?
Putting the situation into perspective, 343 Industries says it has been hearing "far more positive than negative" feedback, so it does not exactly have a crisis on its hands. However, it does realize there has been plenty of chatter and debate over the art style and visual fidelity of the demo, which was actually run on a high-powered PC.
"Based on our learnings from Halo 4, Halo 5, and Halo Wars 2—along with strong community feedback—we decided to shift back towards the legacy aesthetics that defined the original trilogy. With Halo Infinite, we’re returning to a more ‘classic’ art style which was a key message going back to the very first reveal that garnered enthusiastic and positive responses," the developer stated in a blog post.
What that means, according to 343 Industries, is a more vibrant palette and cleaner models and objects with less noise, but not at the expense of detail. The developer readily acknowledges that this style may not appeal to everyone, but it is happy with its decision to go in that direction. In other words, go pound sand if you don't like it (except 343 Industries put it much more nicely).
As to the visual fidelity that sparked so much criticism, the developer notes that some of the complaints include characters and objects appearing flat and plastic-like, along with dull lighting. It has also seen the examples users posted of retouched images, and acknowledged Digital Foundry's detailed assessment.
"In many ways we are in agreement here—we do have work to do to address some of these areas and raise the level of fidelity and overall presentation for the final game," 343 Industries admitted.
At the same time, the developer doubled down on the build used for the demo being a "work-in-progress" with various elements "still being finished and polished" for the final release.
"While some of the feedback was expected and speaks to areas already in progress, other aspects of the feedback have brought new opportunities and considerations to light that the team is taking very seriously and working to assess. We don’t have firm answers or outcomes to share yet but the team is working as quickly as possible on plans to address some of the feedback around detail, clarity, and overall fidelity," the developer added.
So there you have it—in short, 343 Industries has seen and heard the complaints, and it is making some changes to address them, though some elements will remain (like the overall style). We'll just have to wait and see how it works out.

Switching gears, a juicy rumor claims the multiplayer mode in Halo: Infinite will be free-to-play and support up to 120 frames per second, according to The Verge. This comes by way of a reference by an Irish retailer that posted the details on a promotional page, but later removed it.
"The legendary Halo series returns with the most expansive Master Chief campaign yet and a groundbreaking free-to-play multiplayer experience,” read the listing. “Enjoy up to 120 fps and greatly reduced load times creating seamless gameplay with Xbox Series X," the text read.
Even the Google cached copy of the page does not contain the image with the above text anymore, but here it is... 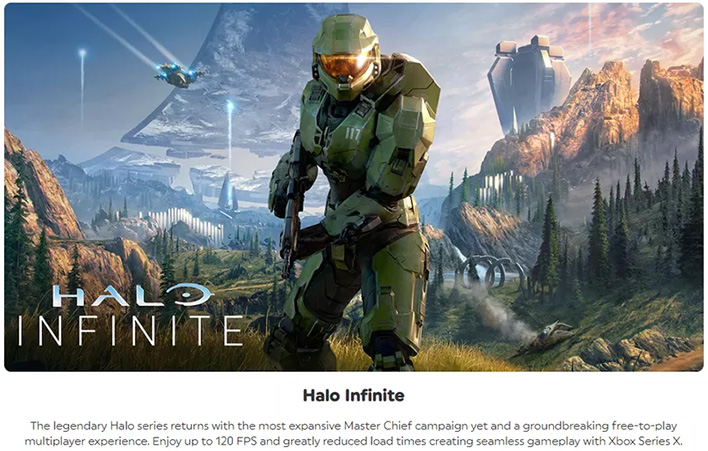 Source: Smyths Toys via The Verge

That is about as solid as a leak gets, and you can pretty much bank on multiplayer being free-to-play (unless 343 Industries and Microsoft change their minds). Additionally, the 120 fps pitch does not come as a surprise, given what we know about the Xbox Series X. Plus, 343 Industries says "up to 4K 60 fps is our target for our expansive campaign experience on Xbox Series X," and if that is the case, 120 fps at 1080p seems reasonable.
Performance will depend on the end result, though, in terms of visual upgrades and other details. Nevertheless, this seemingly bodes well for AMD's next-gen RDNA 2 graphics architecture.