It’s been a while since we’ve seen any deals on Ring products, or Amazon’s Echo family of smart speakers, so it’s quite convenient that we’ve come across a deal this week that combines the two. The primary deal involves the Ring Stick Up Cam, which normally has a retail price of $149.99.

However, with today’s deal, Amazon is selling the device for a new low of $84.99. But it doesn’t end there; Amazon is also throwing in a free Echo Dot with your purchase. The Echo Dot carries an MSRP of $49.99, but can typically be had for around $30 on sale, or even as low as $20 during Amazon’s crazy Prime Day festivities. Whatever the case, it’s still an excellent deal for those that want to add a smart camera to the exterior of their home for security purposes.

The $84.99 pricing and free Echo Dot offers is available for both battery-powered and wired versions of the Stick Up Cam, which is good to hear.

Although the included Echo Dot doesn’t have a display, you can still talk to visitors outside your home by saying a command such as “Alexa, talk to the front door”. Then you could use the camera’s two-way audio functionality to carry on a conversation. However, if you have a device like an Echo Show 8, you can also see the people at your door. 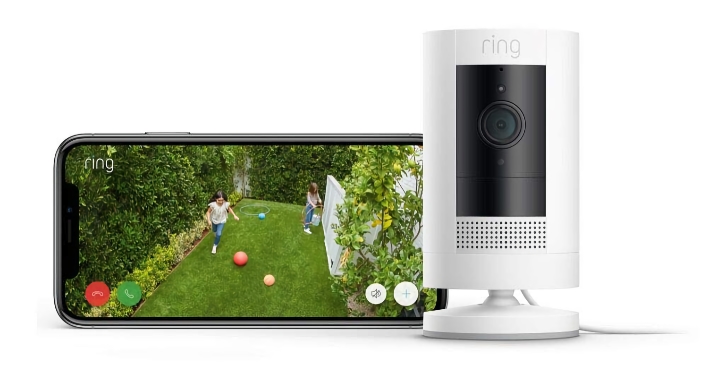 Control of the Stick Up Cam is accomplished via the Ring app, which allows you to set up motion zones, watch live video, and examine recorded motion activity. You can also get notifications via the app when motion is detected. The Stick Up Cam is capable of being placed on a flat surface, or you can mount it to a wall or other solid structure to get the best possible coverage area.