You may have struck out trying to buy a graphics card over the past several weeks, months, or even year, but don't shed a tear over AMD or NVIDIA on the assumption either one is hurting for GPU revenue. They're not. Quite the opposite, discrete add-in board (AIB) sales in the last quarter alone reached a whopping $11.8 billion.
Another name for a discrete AIB is simply graphics card. These are the cards that actually go into a PCI Express slot (we're assuming hardly anyone is buying AGP card these days), as opposed to integrated graphics that are packaged together with certain CPUs. Those integrated GPUs are why Intel technically owns the largest share of the graphics market.
in a new report, Jon Peddie and Robert Dow from Jon Peddie Research compiled an interesting set of sales and shipments statistics. Despite the frustrating GPU shortage that is making it almost impossible to buy a graphics card from a first-party seller, shipments of discrete GPUs increased year-over-year in the second quarter of 2021.
Not by just a little bit, either. 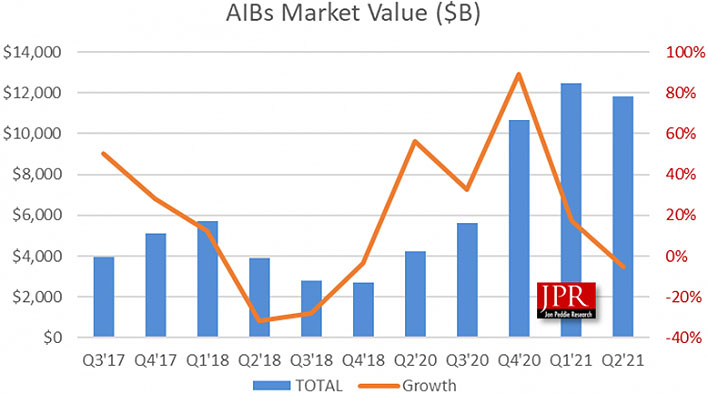 "Unit shipments of add-in boards increased in Q2'21 from last year, while NVIDIA increased market share to 80 percent from last quarter a 0.3 percent increase as well as 2 percent year-over-year. Over $11.8 billion AIBs shipped in the quarter—an increase of 179 percent year-over-year," the report states.
As things stand, AMD and NVIDIA are the benefactors, as they are the only two players in the discrete graphics card market. That will be the case until Intel jumps in with its Arc lineup, starting with Alchemist next year.
According to JPR's latest discrete GPU shipment report, there are 54 AIB partners who buy GPUs from AMD and NVIDIA and build custom cards around those parts. These are companies like ASUS, EVGA, Gigabyte, MSI, Zotac, and dozens of others.
The report says the AIB market reached $29 billion last year, and anticipates it climbing to $44.1 billion by 2023. And maybe that's a conservative figure. Bear in mind that there are large investments on the semiconductor manufacturing side, with TSMC and Intel both pouring billions of dollars into fab expansions. Combined with Intel's entry into the discrete GPU space, the market could potentially see a massive rise in GPU sales, if supply catches up with demand.
In the meantime, the shortage lingers, cryptocurrency miners are still chasing blockchain rewards on the backs of GPUs, and GPU makers are making out like bandits.