The dirty little secret in tech that is not really much of a secret at all is that the GPU shortage is partially a result of cryptocurrency mining. This depressing reality can be lost or overlooked when AMD and NVIDIA downplay how much crypto-mining plays into their bottom line, but there is a bigger picture to analyze beyond the attach rate (PCs that include graphics cards) and direct sales. Looking at the bigger picture, it's estimated that half a billion dollars worth of discrete graphics cards went to miners and speculators in the first quarter of 2021.
Talk about a sobering figure. It's also one that could go up as the shortage looms, depending on how the crypto-market plays out. NVIDIA recently revealed that its dedicated cryptocurrency mining GPU lineup (CMPs) generated $155 million in revenue during the first quarter, and looking ahead, it expects that number to more than double to $400 million during the current quarter.
NVIDIA boss Jensen Huang added a caveat to the financial disclosure, saying the production of CMPs "doesn't take away from the supply of GeForce" GPUs, and instead "protects our GeForce supply for gamers."
"I think that the experience we're going through is going to last a while. And so, one I hope that crypto will—the CMP will steer our GeForce supply to gamers. We see strong demand and I expect to see strong demand for quite some time," Huang added.
It sounds nice in theory, and perhaps in practice it works out that way to an extent. However, the market is a bit more complicated than that. Analyst Jon Peddie from Jon Peddie Research corralled some numbers and estimates, and based on his model, around a quarter of all add-in board shipments (discrete GPUs, basically) went to miners and speculators in the first quarter.
"That's approximately 700,000 high-end and mid-range AIBs in Q1'21. And the market value is about $500 million—a half a billion dollars," Peddie said. "Now, before you run out and buy AMD and NVIDIA shares, understand that they are not getting that surge in pricing—the channel is, and the speculators are getting even more."

This is why the full impact of the situation is not accurately reflected in whatever mining figures and data AMD and NVIDIA decide to share. The overall shortage, which is also impacted by an increase in people working from home, has led to a second-hand market rampant with inflated prices on both new and used cards. 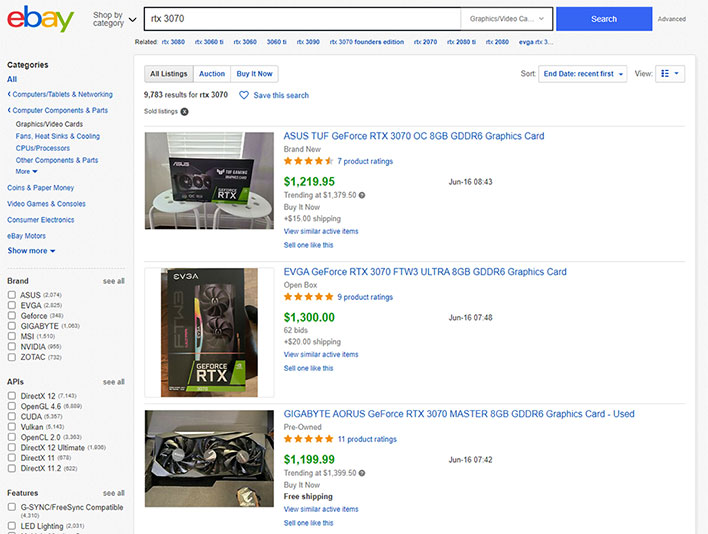 Take for example the GeForce RTX 3070. It is an excellent card that, under normal circumstances, would sell for $599 for the Founders Edition model, and a bit higher for custom-cooled variants by NVIDIA's hardware partners. But take a peek at recently ended listings on eBay and you'll see the GeForce RTX 3070 is selling for around $1,200 to $1,300.
"The overall shortage of parts...has led to the introduction of buying bots that crawl the web looking for AIB inventory and, when found, immediately buy it. The bot owners then take the AIBs, plug them into their farm, raise the price, and offer them on eBay. And some miners will buy them from eBay sellers. Not only new AIBs but AIBs from the last generation," Peddie notes.
Is there light at the end of this depressing tunnel? Sure, but the more important question is, how far away is the light? We are in the midst of an alarming semiconductor shortage that is not only affecting the availability of GPUs, but also certain CPUs, chips for automobiles, and more.
TSMC warned that the shortage could last throughout 2022 and even into 2023. That's the bad news. The good news is, TSMC and Intel are both pouring billions of dollars into new and upgraded fab sites. Those investments will eventually pay off with greater capacity to hopefully avoid this situation from happening again, or at least not for a very long time. However, patience is required, because it will take some time for those efforts to materialize in the consumer space.