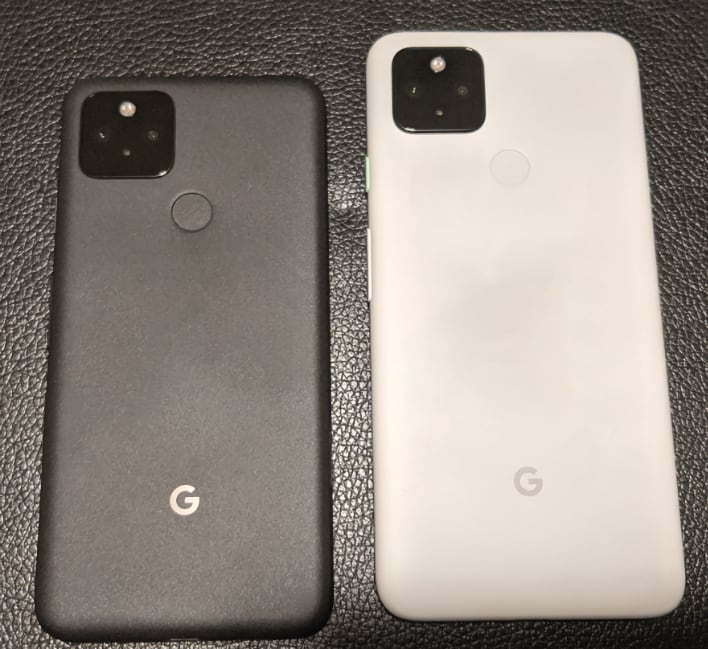 We've got quite a bit of news to present to you from the Google Pixel front today, as information on both the upcoming flagship Pixel 5 and its cheaper Pixel 4 (5G) sibling have leaked. The first bit of info comes in the form of a single photograph that shows the two smartphones side-by-side, but only from the back.

In the image above, the Pixel 5 is allegedly the smaller device on the left, while the Pixel 4A (5G) is on the right. It's rather peculiar that the Pixel 4a (5G) is the larger of the two, but from what we can tell, both have two cameras on the rear like the Pixel 4 and Pixel 4 XL. Unfortunately, there are no live shots of the phones from the front.

However, based on leaked renders that we've already seen for the Pixel 5 -- and new ones below that shows that Pixel 4a (5G) -- the front of both smartphones look very similar to the mid-range Pixel 4a, including a hole punch selfie camera in the top left corner of the display. Other similarities with respect to specs include Qualcomm's mid-range Snapdragon 765G, a 16MP (Sony IMX481) wide-angle camera, 12.2MP (Sony IMX363) main camera, 8MP (IMX355) selfie camera, and a rear optical fingerprint sensor. Interestingly, despite the fact that the Pixel 5 will be Google's 2020 flagship smartphone, it will reportedly include a plastic body just like the Pixel 4a and Pixel 4a (5G).

Google has already informed us that the Pixel 4a (5G) will be priced at $499, but failed to give us a price for the Pixel 5. However, given the differences between the two smartphones, we think that it could be possible for Google to hit a $599 price point for the Pixel 5. If that is indeed the case, the company could have a winner on its hands.