Google announced this week that Android 12 has been released to the Android Open Source Project (AOSP). This announcement comes after Google championed that over 225,000 people participated during the developer/beta phase to submit nearly 50,000 bug reports to help polish the mobile operating system before release.

Although Android 12 has is now available under the AOSP, it will officially roll out to Google Pixel phones in the next few weeks. Samsung Galaxy, OnePlus, Oppo, Realme, Tecno, Vivo, and Xiaomi devices will receive the update later this year.

Android 12 comes with an updated UI, and users can expect to see refreshed app widgets that make them more useful, beautiful, and discoverable. Notifications are also getting a makeover which will make them more useful and modern. Scrolling is said to be smoother with the new UI as Android 12 adds a new “stretch” overscroll effect. The new UI will also introduce splash screens for all apps. 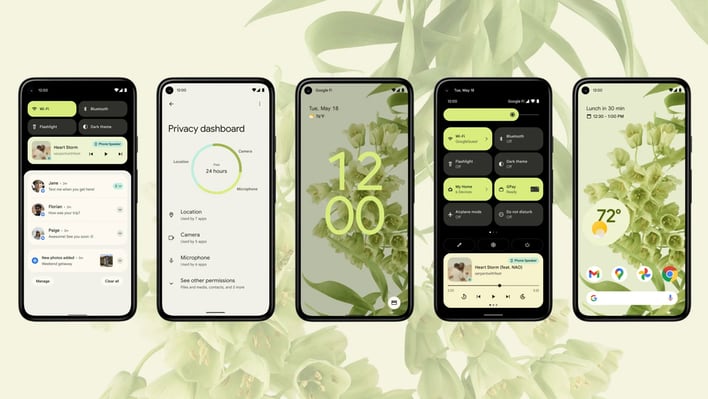 Performance and privacy will also see improvements with Android 12. Users should see improved app startup times, more responsive notifications, and faster machine learning. A new dashboard in Settings will give better visibility over when an app accesses microphone, camera, and location data. An indicator in the status bar will let users know when an app is using the device camera or microphone. For all those concerned about what information their phone Is sharing, this should be welcome news.

People with a Pixel 3 or newer should be looking for the new update in the coming weeks. Those with older Pixel phones are no longer guaranteed Android updates. Anyone with a Samsung Galaxy, OnePlus, Oppo, Realme, Tecno, Vivo, and Xiaomi device should check their manufacture’s website to see if your phone is still eligible for Android updates.

If you want to find out more about Android development and Android 12 you can check out the Android Dev Summit October 27-28th. You can learn more and sign up for updates and more here.