Big corporations seem to always think they know what is best for consumers, and often jam policies down their throats whether they want them or not. Case in point, Google is moving away from traditional tracking cookies in its Chrome browser to a system called Federated Learning of Cohorts, or FLoC, which has drawn widespread scrutiny. For those who have no interest in FLoC but want to stick with Chrome, there is a way to disable it.
We'll get to the steps in a moment, but first let's talk about cookies and FLoC for a moment. Cookies are what sites use to track user sessions or data, so that if you leave a website and return to it later, you are still logged in. Third-party cookies also track user interests, mainly for the purpose of targeted advertising. That is where FLoC comes into play.
There is an inherent privacy concern with cookie-based tracking, and FLoC is part of an effort at Google to develop open source "privacy-preserving technologies that make third-party cookies obsolete and enable publishers to keep growing their businesses and keep the web sustainable." Sounds great, so what is the big deal?
Rather than track individuals, FLoC lumps users into groups, thereby allowing companies to deliver ads to specific groups called cohorts, like people are interested in running shoes, for example. Part of the concern is that it would be possible to create groups for people who visit medical websites or follow certain religious or political topics, though Google promises not to do that.
Despite Google's pinkie promise, WordPress sees FLoC as a security threat, and the civil liberties group Electronic Frontier Foundation (EFF) says in no uncertain terms, "Google's FLoC is a terrible idea."
"FLoC is meant to be a new way to make your browser do the profiling that third-party trackers used to do themselves: in this case, boiling down your recent browsing activity into a behavioral label, and then sharing it with websites and advertisers. The technology will avoid the privacy risks of third-party cookies, but it will create new ones in the process," EFF says. "It may also exacerbate many of the worst non-privacy problems with behavioral ads, including discrimination and predatory targeting."
EFF is concerned about browser fingerprinting, which is the practice of of taking discrete bits of information from a user's browser to create a identifier for that browser. This is a practice that is "notoriously difficult to stop," EFF says. It also takes issue with other aspects of FLoC, but the bottom line is, EFF is against the idea and is imploring Google not to go that route.

How To Disable FLoC In Google's Chrome Browser

It does not appear as though Google will be taking EFF's advice on FLoC, and it intends on rolling it out to the public at large by next year. In the meantime, it is conducting tests in certain regions. including the United States.
If you use Chrome and have version 89 or later installed, you might be part of the trial, or you might not be. Google has not made it easy to check, but EFF did, with an online FLoC detection tool. It only takes a second to run and will let you know if you are part of the trial (only about 0.5 percent of Chrome users are in the trial, but that figure could go up at any time). 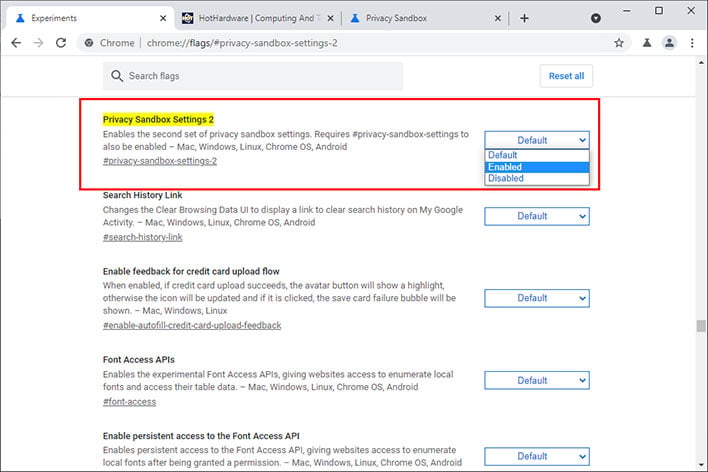 The latest version of the Chrome Canary build brings FLoC into view so you can opt-out, and the same should be true for people are in the trial on the stable version of Chrome. There are two parts to opting out, though. First, follow these steps...
The image above shows the flag you are looking for. It may seem counterintuitive to switch the toggle over to Enabled, but that allows you to access the FLoC toggle on another section. Here's how... 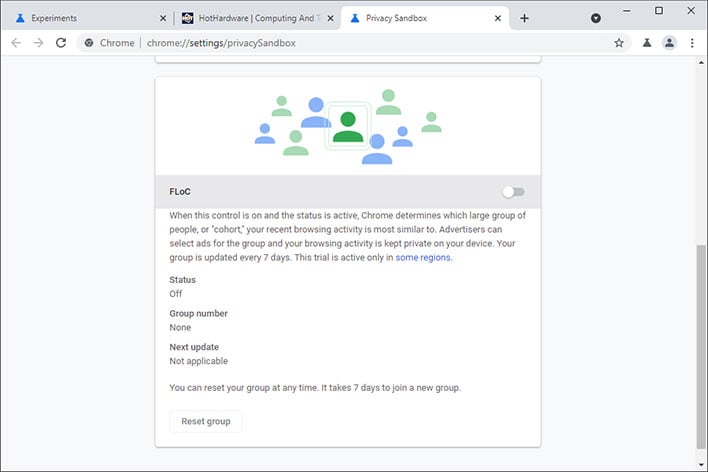 After you follow these steps, you can revisit EFF's online tool to double check that FLoC is no longer enabled on your browser. Alternatively, you can switch to a different browser, as for the time being it appears only Chrome will implement FLoC support. Firefox and even Chromium-based browsers like Microsoft Edge (which is a really good browser, by the way) are not joining Google in the FLoC effort.