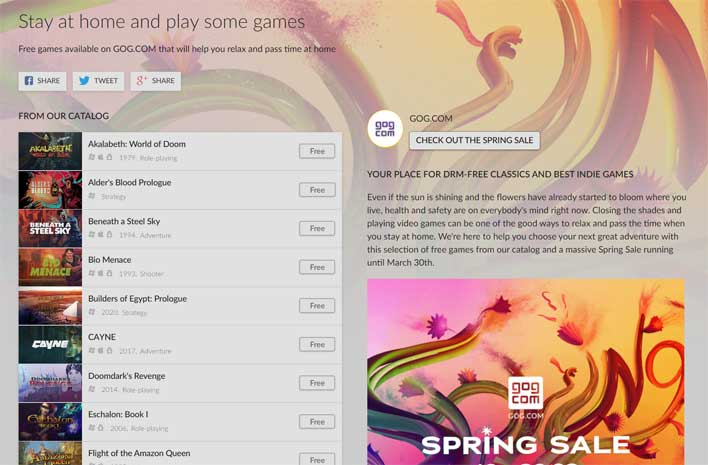 Certainly, the big news all around the world right now is coronavirus/COVID-19, which is sweeping the globe and forcing many businesses to shut down and send employees home to work. For many people around the world, there is no option to work at home, so they are stuck indoors with little to do. Anyone interested in playing games on their computer will be happy to hear that GOG has a bunch of free video titles that you can play on Windows, macOS, and Linux computers.

Most of these games are of the independent sort, and some aren't available on all platforms. In all, the front page of the catalog lists 27 different free games. Some of the titles were released this year or within the last few years, while others are significantly older classic games.

The oldest game we saw on the list is "Akalabeth: World of Doom," which is offered for Windows, macOS, and Linux and was originally released in 1979. Naturally, you can't expect superb graphics on a game that launched before many gamers were born. The games released just this year include titles such as "Builders of Egypt: Prologue." There are quite a few '90s games in the mix, and fans of classic games will be thrilled.

Among the offerings is a trio of "Ultima" games from the late '80s and early '90s. GOG is also having a spring sale with a significant discount on both classic and modern video games. One of the biggest discounts for a popular and more current game comes on "The Witcher 3: Wild Hunt Game of the Year Edition" at 70 percent off, making it $14.99. "Xcom 2" is available at 75 percent off, making that game $14.99 as well. For those unfamiliar, GOG also has an excellent refund policy on games if you buy a game and hate it.