A Santa Monica Studio game dev tweeted out his frustration, after gameplay of PlayStation's upcoming God of War Ragnarok was leaked. Footage of gameplay has been hitting the internet over the last couple of days, ahead of the game's official release on November 9, 2022.

Leaks are not uncommon in the gaming world, but most only hint at gameplay with either screenshots, or short snippets of gameplay. While those types of leaks may annoy game devs, when the entire game is leaked ahead of release, they get down right angry (and rightfully so). Such was the case for dev Cory Barlog, who worked on the upcoming God of War Ragnarok, and tweeted out his frustration about the massive leaks. 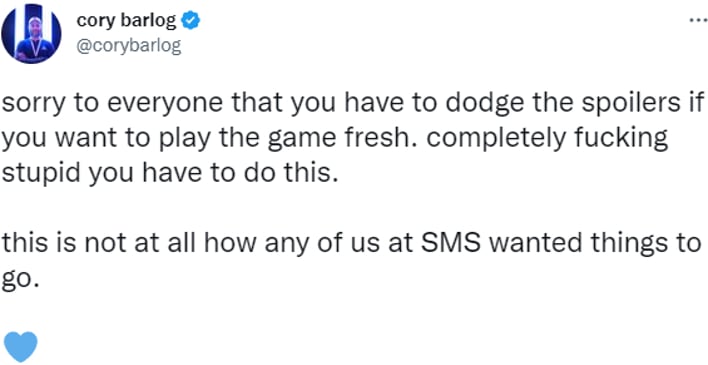 Barlog tweeted, "sorry to everyone that you have to dodge the spoilers if you want to play the game fresh. completely f---ing stupid you have to do this." He went on to add that it was not how the team at Santa Monica Studio (SMS) wanted things to transpire.

In a follow-up tweet, Barlog went on to say that he was "so beyond frustrated," and felt terrible for the team at SMS, and that the entire scenario was "incredibly stressful for us all." He concluded by saying, "mental health break time." 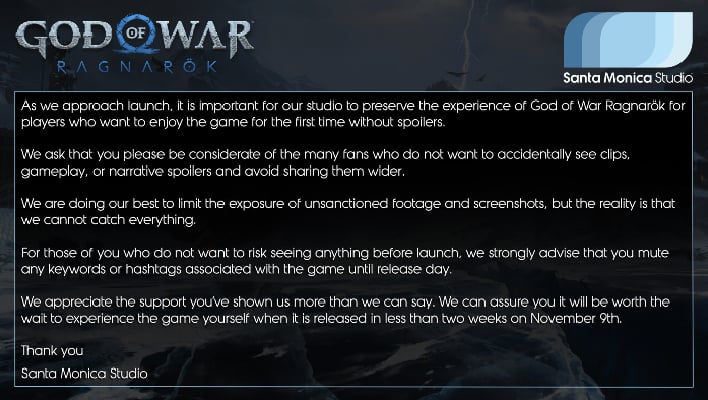 \
With how popular the leaked gameplay is on YouTube right now, some with millions of views, SMS decided to issue a statement of its own. In short, the studio asked that people be considerate of those who want to play the game without any spoilers, and asked that gamers not share the leaked video footage. You can read the entire message above.

It is well noted how overworked most game devs are, as they work tirelessly to bring the best possible gaming experience to players while under stressful deadlines. So, to have this type of leak just a week ahead of release is obviously heartbreaking for all those put their blood sweat and tears into the project.