Have you played God of War yet? If not, have you at least read our review of the game? The 2018 PlayStation 4 mega-hit has gotten one of the cleanest PC game ports in recent memory, and we didn't encounter any significant bugs whatsoever during our testing, despite running it on two different systems, three different graphics cards and multiple input devices.

Still, releasing a PC game is a complicated affair, and even moreso for a big release like God of War. Some users did indeed have problems, and porting house Jetpack Interactive has been hard at work addressing those problems where it can. Patch 1.0.4 for the game just dropped yesterday, and it's a pretty major update that fixes a decent little batch of bugs along with adding one highly-requested new feature.


Fixed bugs in the v1.0.4 release include "rare" graphics driver crashes, game crashes when exiting, and a major bug with incorrect VRAM detection on Intel Xe platforms. That latter bug was part of the problem forcing 12th-gen Intel CPU users to disable their integrated graphics to play, with another part of that issue being addressed in patch 1.0.2. 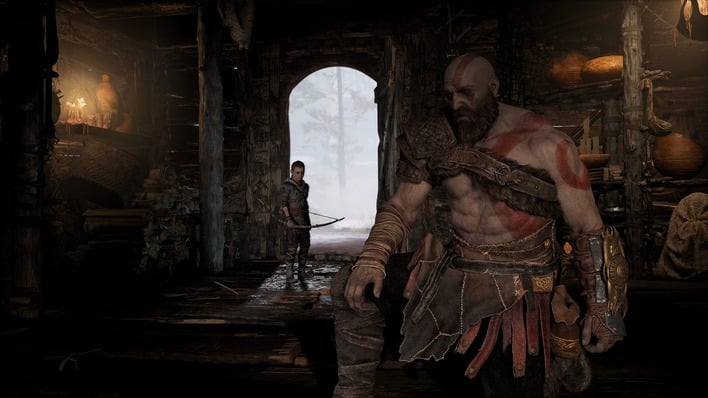 The rather notorious memory leak problem plaguing hardcore gamers playing for six hours at a stretch was fixed in v1.0.3, but a similar issue where Atreus would become unresponsive after a long time playing has been resolved in this latest patch. Jetpack's also fixed a problem where ultrawide monitors could be fixed into windowed mode (despite the game having full support for Hor+ display on wide aspect ratios), and a problem where opening the inventory could soft-lock the game if done during realm travel.


The big feature added in this update is one that many users have been requesting: a slider to control DLSS Sharpening. As a HotHardware reader, you're surely familiar with NVIDIA's Deep Learning Super Sampling, or DLSS. What you may not have known is that recent versions of DLSS apply a sharpening step after the upscaling.
A lot of people seem to prefer this because it adds detail to surface interiors, but it can also take things too far, adding noise and false detail that isn't there in the original presentation. It also can go a long way toward un-doing the work that the depth of field effect does in blurring distant scenery. If you don't like the sharpening effect in God of War, good news: you can now turn it down or disable it altogether with this new slider addition.

Whether you have God of War on Steam or on another store, you should already have the 1.0.4 update queued for download. Also, if you changed to the v1.0.2 experimental branch on Steam, make sure you manually change back to the standard release, as that branch will not be updated.