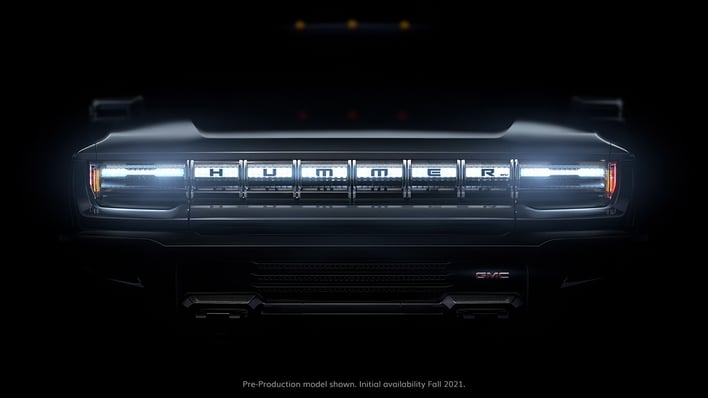 Here's a name we haven't though much about in the past decade or so: Hummer. Hummer was once a name synonymous with excess thanks to its big, burly lifted SUVs that were loathed for their immense girth and equally voracious thirst for unleaded gasoline. The brand was eventually shutdown in 2010, making it a victim of General Motors' bankruptcy and the economic downturn.

However, Hummer is coming back from the dead in the most unlikely form. It is being resurrected as a fully-electric truck, rather than as a hulking beast powered by a V8 internal combustion engine. The vehicle will make its television debut this weekend in a 30-second Super Bowl commercial starring NBA superstar Lebron James.

But until that time arrives, the new Hummer, which will be sold through GMC dealerships, is being described as a "Quiet Revolution" that will feature a staggering 1,000 horsepower and a mind-numbing 11,500 lb-ft of torque. That will be enough to accelerate the beast from a standstill to 60 mph in just 3 seconds.

“GMC builds premium and capable trucks and SUVs and the GMC Hummer EV takes this to new heights,” said Duncan Aldred, who serves as the VP of Global Buick and GMC. “We are excited to debut our revolutionary zero-emissions truck during the biggest night in TV advertising.”

The new Hummer will be doing battle against the Tesla Cybertruck when it comes to vying for the crown as the most badass EV truck on the planet. The flagship Cybertruck will come with three electric motors, and will scoot from 0 to 60 mph in just 2.9 seconds. Tesla also says that the AWD battle cruiser will travel over 500 miles on a charge and can tow up to 14,000 pounds. The Cybertruck will start at $69,990, with deliveries commencing in late 2021.