At this point, the it feels like a foregone conclusion that AMD will refresh its Radeon RX 6000 series with a few upgraded models, including the Radeon RX 6950 XT, Radeon RX 6750 XT, and Radeon RX 6650 XT. They're coming, unless the growing pile of leaks and rumors are all off target. And we can add one more to the pile—the first apparent retail listings for the flagship SKU.
There are at least two vendors in Australia that have seemingly jumped the gun, both with product listings for a Gigabyte Radeon RX 6950 XT Gaming OC model. This is a custom cooled and factory overclocked part, though the precise specifications are still unknown. What we do know, however, is that it's not going to be an inexpensive graphics card. 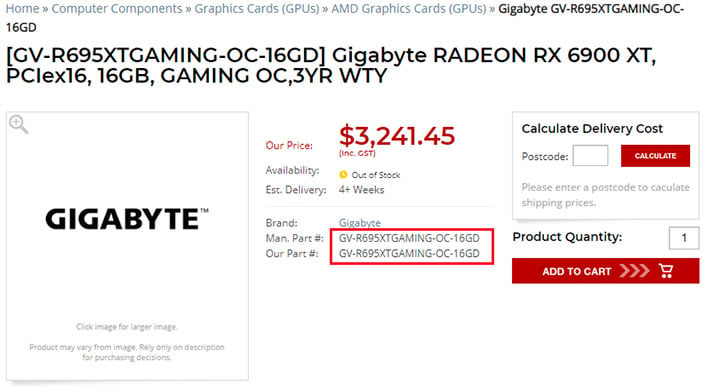 The listing above shows MegaBuy pricing the card at $3,241.45 AU, which is around $2,400 in US currency. Note that the heading referencing a Radeon RX 6900 XT is likely a place holder or typo, as the manufacturer part number (GV-R695XTGAMING-OC-16GD) is almost certainly in reference to the Radeon RX 6950 XT Gaming OC. It also matches the part number Gigabyte recently registered with the Eurasian Economic Commission (EEC).
To put that price into perspective, the same vendor sells GeForce RTX 3090 Ti graphics cards starting at $3,298.90 AU (ASUS TUF Gaming). 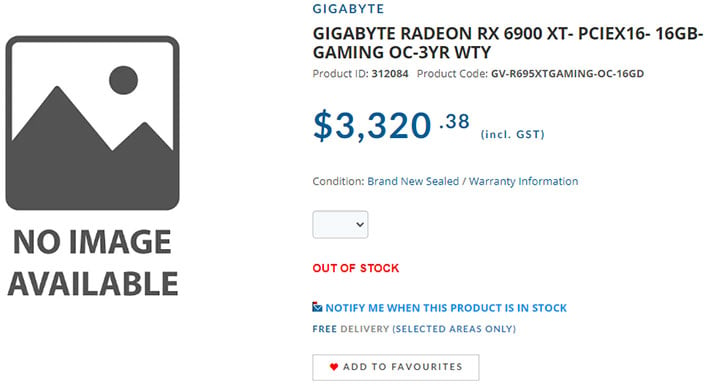 The other listing can be found at ITNest, which has the same graphics card priced at $3,320.38 AU (~$2,459 USD). That's also around the same price that the vendor sells the GeForce RTX 3090 Ti, which lists an overclocked model from Inno3D for $3,377.43 AU.
Of course, the usual caveats apply. These are premature listings, so the pricing could be way off. We also can't assume that pricing in Australia will match pricing the US after converting the currency—it doesn't usually work that way. And these are just two vendors.
Still, we can obviously expect a flagship card to carry flagship pricing (no duh, right?). The MSRP for the Radeon RX 6900 XT is $999, with custom cards commanding a bit more. So barring an across-the-board  price cut, the Radeon RX 6950 XT is likely to debut somewhere north of there. Just hopefully not so far north that it nudges up against NVIDIA's flagship card.

As for the specifications, it's rumored the refreshed cards will get a bump from 16Gbps to 18Gbps GDDR6 memory. It's not clear if there will be any clock speed changes or other alterations.