Let's face it, suggested retail pricing on graphics cards is largely academic, because any available inventory sells out in nanoseconds anyway. Scalpers then hawk them on eBay and Craigslist for jacked up prices. Be that as it may, every SKU still gets an MSRP, and that includes NVIDIA's upcoming GeForce RTX 3080 Ti. We don't have any official word on what that will be, but some early retail listings make it clear the Ti variant is going to be expensive.
Rumor has it the card will launch at $999, same as AMD's Radeon RX 6900 XT. That at least seems plausible, considering NVIDIA's flagship GeForce RTX 3090 carries a $1,499 MSRP. Here's how it would fit into the MSRP hierarchy, if that ends up being the case...
Of course, few people are actually lucky enough to score a new GPU at MSRP. Scalpers and marketplace sellers charge a premium, so getting a GeForce RTX 3080 Ti at $999 (if that ends up being its launch price) will be a pipe dream for most people. Instead, early listings suggest it will sell for much higher—around double the MSRP.
Remember the recent photo of a pallet of MSI GeForce RTX Ti Ventus 3X 12G OC graphics cards being prepped for shipment out of China? Well, it's found a retail listing at a retail site in New Zealand...

The retailers asking price is $2,543.46 NZD, which works out to around $1,831 in US currency. Pricing will vary by territory, as is almost always the case, but usually in relatively small amounts. In this case, the listed price is around $832 higher than the rumored $999 MSRP. Ouch! It is even several hundred dollars higher than the MSRP for the GeForce RTX 3090.
Here's another listing, for a Gigabyte model...

Pricing is even higher on Gigabyte's GeForce RTX 3080 Ti Gaming OC graphics card—it's listed at $3,152.50 NZD, which works out to a whopping $2,270 in US currency. That is more than double the rumored MSRP.

It's not just this particular retailer, either. Here's another listing for a Gigabyte GeForce RTX 3080 Ti Eagle graphics card... 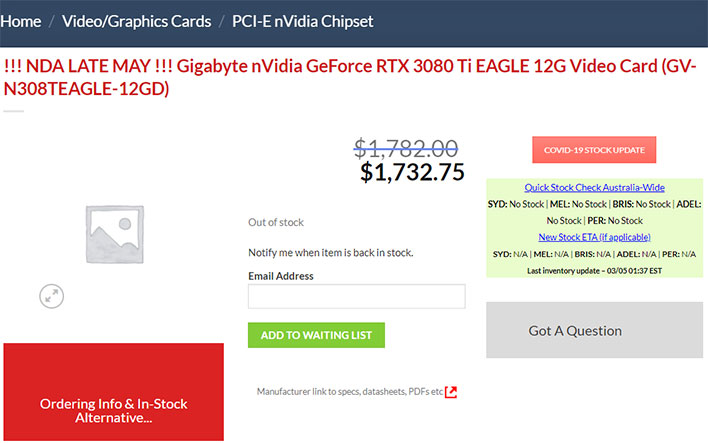 In the above listing, the retailer has the Gigabyte card listed for $1,732.75 AUD, apparently on sale from $1,782 AUD. The sale price works out to $1,344 in US currency. That is closer to the rumored MSRP, at least, but still expensive.
Recent leaks and rumors suggest the GeForce RTX 3080 Ti will arrive with 10,240 CUDA cores instead of 10,496 CUDA cores as mentioned in earlier leaks. It is also expected to wield 12GB of GDDR6X memory (down from 20GB in earlier leaks), tied to fat 384-bit memory bus. There's also a good chance NVIDIA will implement a hash rate limiter to gimp mining performance.
Look for the GeForce RTX 3080 Ti to launch sometime later this month.